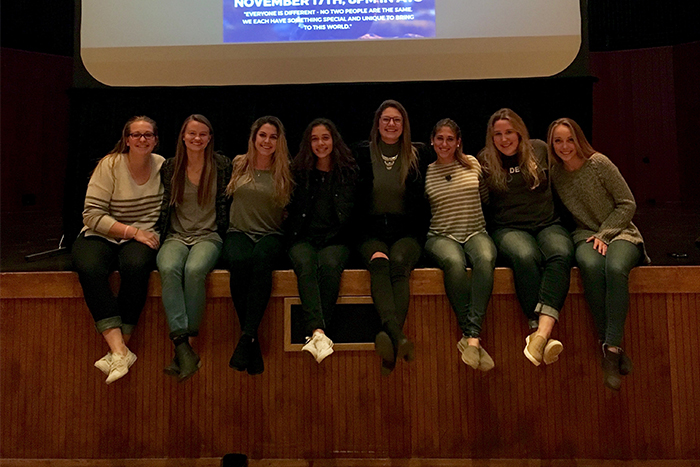 Lindsey Zwecker ’17 and Mary Martin ’17 are a softball player and basketball player, respectively. They are a biochemistry & molecular biology major and a political science major. But together, they are motivated student-athletes who saw a gap and turned it into an opportunity. Last fall, Zwecker and Martin founded the Hera Society, a female athletics honor society. Named for the Greek goddess, the Hera Society seeks to unify female athletes across team borders while drawing attention to issues prominent within the world of women in sports.

The society is made up of eight senior female athletes, each representing a different sport. Currently, members belong to the basketball, softball, volleyball, track, cross country, lacrosse, soccer, field hockey and tennis teams. As documented in the society's mission statement, members are selected on the basis of campus leadership, academic record and athletic participation. These women are expected to uphold the core values of scholarship, leadership, equality, service, integrity, sportsmanship, tenacity and resilience in addition to showing their dedication by addressing social issues affecting female athletes, teaching the importance of athletics and teamwork and creating a support system for female athletes on campus and in the community.

“Our main goal is to have girls who will come together and want to be together in a group and then also inspire each other to come to the other [teams’] games,” says Martin. “We just want to support other women on campus.”

To ensure the continuity of the society and the cohesion of members, each senior will recommend a junior at the end of the spring semester to replace them upon graduation. All suggested students will be discussed and selected in the same way as the original members, but the aspect of individual character will help determine which sports teams are represented from year to year. “We don’t want it to be these eight sports forever,” says Zwecker.

To achieve the outreach goals outlined in the mission statement, members meet and brainstorm events that will engage the campus community and beyond. Since its founding, the Hera Society has hosted two events and has several more in the planning stages. The fall event, “Beautiful Me,” brought a panelist to campus to discuss eating disorders and their impact on female athletes. The most recent event coincided with the National Girls and Women in Sports Day. The Heras invited girls of all ages from the Carlisle community to participate in a sports clinic in which they were able to learn about all eight of the represented sports from their respective athletes.

For future events, the society intends to partner with groups already established on campus, including the Women’s & Gender Resource Center and the Prevention, Education and Advocacy Center, to address mental health and stress, among other prominent issues. Although their events are primarily geared toward female athletes, anyone interested is welcome to attend.

Though the society is new, the members are prepared to make their mark on campus. Katherine Bixby, head women’s basketball coach and society advisor, says, “It's the start of a student-led, student-generated, empowering group that will continue to impact the Dickinson and Carlisle community in awesome ways.”