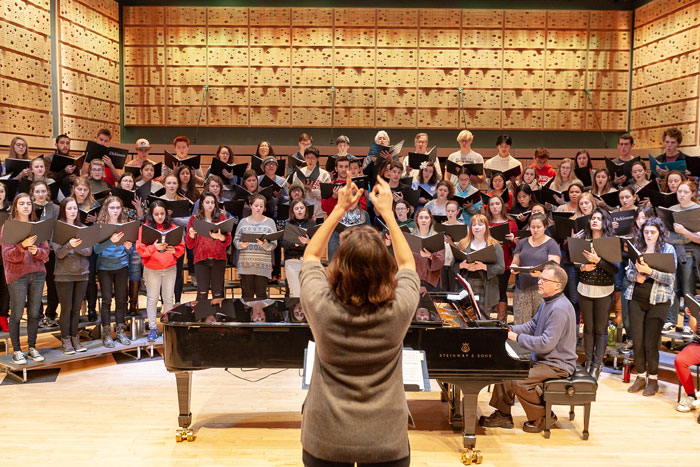 “[The concert] is a statement of broad inclusivity and the importance of representing a wide diversity of voices through artistic programming,” said Associate Professor of Music Amy Wlodarski. “A concert like this reaffirms the intercultural vibrancy of Dickinson and celebrates the beauty and power that comes from giving that diversity voice and presence on our concert stage.”

During her time as choir director, Wlodarski has received countless emails from students studying abroad, each of whom have shared their favorite songs from their host choirs. With the assistance of a generous teaching grant, the musicologist purchased scores in a variety of world languages that were underrepresented (or entirely absent) from the college’s choral library, resulting in this program of global music, which was declared as a “favorite” by many students.

“Dickinson’s global perspective is an important one, especially now,” said Brianna Geesaman ’21 (international business & management), who intends to study abroad in Bologna, Italy. “Music and language can tell a lot about a culture. I truly enjoyed learning the pieces and will treasure the emotions that each song provoked.”

The repertoire challenged the choir to grow in empathy and understanding with the cultures from which the music was drawn and to engage with languages to which many students had little exposure—a challenge that invited members of the choir who were fluent in the languages to step up and share their talents and cultures with the rest of the choir. And though it was difficult for many students to learn, they embraced the opportunity.

“With each new language, we took care to learn proper pronunciation from native speakers to best honor the culture being celebrated,” said Christopher Burrow ’20 (economics). “Choir has given us a unique introduction to numerous cultures, each of which we have immediate access to through Dickinson’s own study-abroad programs.”

“Generally collegiate choirs might feature three to four European languages on a program and feel highly accomplished,” added Wlodarski. “I really feel a program like this might only be possible at a globally minded and ambitious place like Dickinson.”