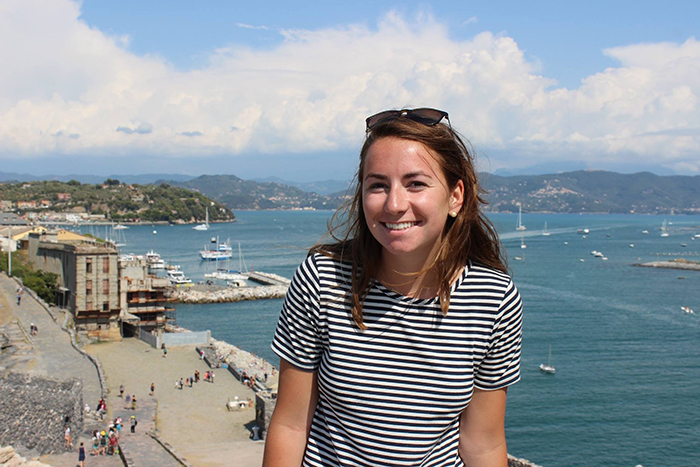 Growing up, Mary Hinton ’19 hung a postcard from Venice in her room and dreamed of traveling there one day. She lived that dream as a Dickinson study-abroad student, and she has expanded her world in many other ways, as an international studies major with a concentration in security studies, as an intern at high-level agencies and organizations, and as a member of Student Senate. Below, she discusses why she chose Dickinson, her favorite movie, the attributes she values most and the importance of courage. She also relates her experiences researching reconstruction teams in Iraq and Afghanistan as a summer intern for the U.S. Army War College, an experience that led her to a summer research internship at the U.S. Agency for International Development (USAID), where she interviewed one of Time magazine’s Most Influential People.

Growing up, I loved the Harry Potter series.

Napoleon Dynamite. I used to watch this movie all the time with my siblings, cousins and best friend. If I’m with my family, there is usually a Napoleon Dynamite quote or joke thrown in a lot of conversations.

The international studies major was what originally attracted me to Dickinson. On my Accepted Student Preview Day, I befriended other accepted students and met professors and students who genuinely seemed excited to get to know me and answer all my questions. I knew that Dickinson would be a great place for me, and that I could make lifelong friends while getting a great education.

I became interested in international affairs during my high school AP U.S. History class. At Dickinson I took International Relations. It was really interesting to learn about the different IR theories and lenses through which to view the world. I liked being able to look at a problem in the world, view it through several different lenses and determine both the cause and the solution.

My favorite professor has been [Assistant Professor of Political Science] David O’Connell. I took his American Government class. He is always energetic and passionate about what he is teaching. Even though I had a class with him at 8:30 a.m., I never dreaded getting up for class and never found myself not paying attention. He has always been supportive, and he cares for his students.

I studied abroad in Bologna, Italy, in fall 2017. The experience was incredible, from the food to the history. My favorite moment was going to Venice for the first time. Growing up, I had a postcard from Venice hanging in my room, and I have wanted to visit the place with all the canals since I was four years old. Arriving in Venice, walking out of the train station and seeing the Grand Canal was almost surreal. Venice is such a beautiful, interesting city and was worth the long wait to visit!

I am hoping to work either overseas or in Washington, D.C., next year before applying to graduate schools and pursuing a master’s in the international development field.

How I define “useful education”:

A useful education is one that opens people’s minds and introduces them to new perspectives. The knowledge and skills gained from a useful education can be applied to any job or problem. These skills include learning different ways to approach a problem, and learning to write and think creatively.

My dad has been a huge influence and great role model in my life. He is truly one of the most generous, hardworking people I know. He has volunteered a lot in our hometown, from coaching football and soccer to serving on our church’s finance committee. However, he is most famous for his chocolate chip cookies. Whenever a friend or neighbor has a baby, is in the hospital or has a relative pass away, my dad is one of the first people to stop by, always with a huge tin of cookies. His cookies have gotten me through finals, welcomed new neighbors and comforted others after a death. He has shown me that even small gestures mean a lot and to always make an effort to be kind and help others.

Dickinson is a fun, lively community filled with some of the best and smartest people I know.

This past summer I interned at the United States Agency for International Development (USAID), in the Bureau for Legislative and Public Affairs. I helped communicate the work and mission of USAID to the public, state governments and partner companies and organizations. I loved my internship with USAID, because it allowed me to learn so much about the development sector and the work that USAID does all over the world. I was able to work on many different projects, ranging from interviewing Nice Nailante Leng’ete, one of Time magazine’s 100 Most Influential People, to preparing for meetings with state governors. Working on so many different projects allowed me to gain a better understanding of what each bureau within USAID does and how the agency operates.

Last semester I interned at the Army War College’s Peacekeeping and Stability Operations Institute. Additionally, I interned in the Massachusetts Governors’ Office of Constituent Services after my first year.

Last spring, I completed research at the U.S. Army War College Peacekeeping and Stability Operations Institute, here in Carlisle. I researched the work done by provincial reconstruction teams in Iraq and Afghanistan and developed a list of best practices. Additionally, I created my own recommendations for how the United States can better utilize and operate reconstruction teams in post-conflict areas. The research project helped prepare me for my internship at USAID, and gave me background on work that USAID has done.

How Dickinson helped me better understand persons different from me:

Dickinson is a diverse community, with people from all over the world. Simply talking to my classmates about their homes and upbringings can be eye-opening. Additionally, the Dickinson community often comes together to discuss and learn about issues related to race, ethnicity, nationality, religion and socioeconomic status. I think that my Dickinson education has prepared me to be able to work with, connect with and understand people of all different backgrounds.

Don’t be afraid to put yourself out there, whether that means reaching out to someone you don’t know that well, running for Student Senate or asking a professor about research opportunities. You’ll likely never be worse off for it, and college is supposed to be a time where you meet new people and try different things.