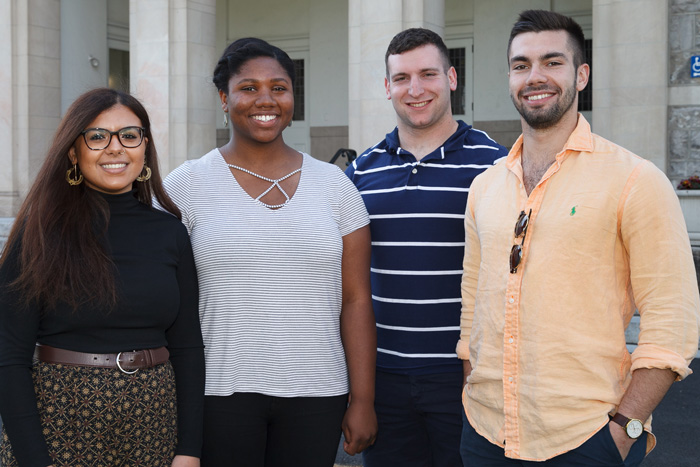 Their achievements add to Dickinson's longstanding Fulbright success, which includes being regularly named a top Fulbright producer by the Department of State.

“I’m excited to dig deeper into the interests that I have developed at Dickinson, specifically conflict studies,” says Ashley Lindsey Morefield ’18 (international studies, French & francophone studies), who has interned at STAND (Student-Led Movement to End Mass Atrocities) and will teach English in the Ivory Coast. “Dickinson has given me a solid foundation in a variety of fields that I know will be helpful for my personal growth and future career.”

The Fulbright ETA awards promote cultural understanding between representatives of the United States and host countries around the world. Ingrid Brandt '18 (French and francophone studies, Italian studies) will head to Luxembourg to do just that, as will Carol Fadalla ’18 (psychology) in Amman, Jordan, and Andrea Bisbjerg '18 (international studies, French and francophone studies) in Laos. "I'm most looking forward to exploring a new country in a region I have always loved," says Bisbjerg, who grew up in Southeast Asia. "I'm excited to rediscover familiar flavors and stunning nature. It should be a fantastic year in what my dad has called one of the friendliest countries on Earth.”

Like Morefield, Fadalla credits an internship—with the Comprehensive Rural Health Project, in Jamkhed, India—with setting her on a path to the Fulbright.

“During this internship, I was able to gain many valuable skills, including … intercultural communication skills, curriculum development and grant writing,” she says. “This was a wonderful experience during which I was able to understand how NGOs and communities can team together to sustain change. I’m most excited to travel and work in Jordan as a Fulbright scholar. This will be a new and challenging experience.”

Elizabeth Wolf '18 will be teaching English in Spain and looks forward to one day working with and mentoring foster youth, especially those from Los Angeles. While Lee Mottola ’18 (German, international studies) will head to Berlin, Germany, for his ETA, and it follows on the heels of his living abroad in Germany for a year as a junior.

“[That time abroad] helped me learn to live and thrive in a foreign country on my own,” says Mottola, who also represented Dickinson at a Mellon Foundation simulation at the Virginia Military Institute, where he worked on a crisis simulation with students from military academies from around the nation. “I’m really excited to be living abroad once again, especially in Berlin. It’s always been a dream of mine to live in that city, and it is finally coming true.”

Patrick Harchik ’18 (international studies, Russian) will be in Bulgaria for his ETA, and there’s a good chance what he’s been up to at Dickinson these past four years has served as a launch pad for yet another stint overseas.

“At Dickinson, I was exposed to many excellent educational, cultural and professional experiences that helped shape my future—I learned how to critically think about global problems and apply them to real life scenarios,” says Harchik, an ROTC cadet who has already studied abroad in Dickinson's Moscow program and attended the ROTC's Cultural Understanding and Language Program in Lithuania. This summer, he’ll attend Project GO's Advanced Russian Program in Estonia and will later serve as a U.S. Army Officer in the Infantry. “I’m looking forward to the incredible experience of learning about a new culture, history and language in Bulgaria.”

Delphine Dall'Agata ’17 (Italian studies, Spanish) has received a Fulbright study/research award that will extend her time in Italy. She's currently in Italy as an English teaching assistant with Istituto Tecnico Agrario "Stanga," and she'll move to Turin for her Fulbright. There she'll study urban agriculture under the supervision of Professor Serenella Iovino at the University of Turin, where she'll also be attending courses in the Socio-Environmental Sustainability of Agrifood Networks master’s program, supported by the UNESCO Chair in Sustainable Development and Territory Management.

Dickinson’s Fulbright success this year isn’t limited to students. Last year, Dickinson was named a top producer of U.S. Fulbright Scholars, and this year Bedi and Paulson have added two more. Bedi has been awarded an IIE Fulbright-Nehru Academic and Professional Excellence Award, which she'll apply toward her project “An Ethnography of Solar Energyscapes in India.” In the south Indian state of Kerala, she'll "study the everyday narratives of solar energy anticipation, implementation and energy access through text analysis and interviews with solar entrepreneurs, government officials, solar service providers and community stakeholders."

Paulson has been awarded a Fulbright to attend the U.S.-Korea International Education Administrators Program, a two-week seminar in Korea this summer. The program of cultural exchange will find Paulson meeting with representatives from Korean universities, private-sector agencies and organizations and selected government agencies and discussing the landscape of U.S. higher education.