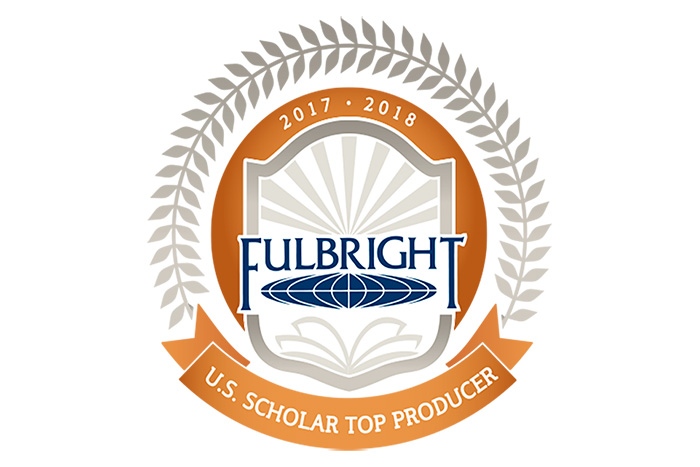 Dickinson has been named a top producer of U.S. Fulbright Scholars for 2017-18. Awarded by the U.S. Department of State's Bureau of Educational and Cultural Affairs, the Fulbright Scholar Program offers more than 500 awards, recognizing strides in teaching, research or a combination of the two. The scholar program is available for college faculty and staff as well as for professionals, journalists, artists, scientists, lawyers, independent scholars and more.

Dickinson is consistently recognized as a top producer of Fulbright students and scholars.

Vice President for Enrollment Management Stefanie Niles and Professor of Political Science Douglas Edlin were both named Fulbright Scholars in 2017. Last year, Niles attended an intensive two-week seminar on France's higher education system. Hosted by the Franco-American Commission for Educational Exchange, this program was developed to help higher education leaders explore new strategies to engage and serve international students and prospective study-abroad students. During the seminar, she met with U.S. and international colleagues and was one of only 12 higher education leaders to be awarded a Fulbright to participate in the seminar.

As part of his award, Edlin spent the fall 2017 semester at Queen Mary University of London performing a research project titled, "The Same But Different: Class Action Litigation in the UK and the U.S." In addition to this prestigious distinction, Edlin received the college's 2014 Distinguished Teaching Award, the highest honor given to a Dickinson faculty member.

The Fulbright Program is the U.S. government's flagship global education exchange program. Formed in 1946, the Fulbright Program has provided more than 370,000 participants—recognized for their intellectual merit and academic, professional or artistic expertise—with the opportunity to exchange ideas and contribute to finding solutions to shared international concerns. The Fulbright Scholar Program recognizes faculty and experienced professionals spanning 46 disciplines across more than 125 countries worldwide.