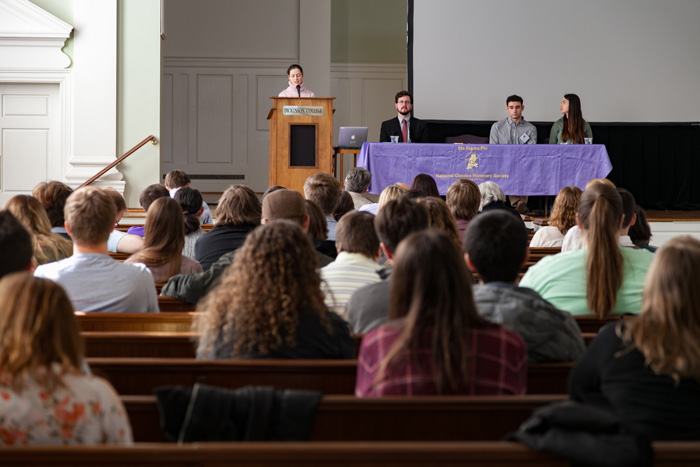 Dickinson College's Department of Classical Studies recently explored everything from the Hercules cycle to Caesar and the Battle of Alesia during the national conference of the Eta Sigma Phi classics honor society. Hosted on campus—and attended by nearly 100 undergraduates and 15 faculty members from across the country—the three-day annual conference featured competitions, presentations and an exploration of the Trout Gallery's classical collections.

In her opening remarks, President Margee Ensign posited that the vast growth in classical scholarship over the past half century is a sign of the strength of the liberal arts as well as the foundation upon which Dickinson was built.

"Enlightenment intellectuals [like Benjamin Rush] who led our revolution and the creation of our new nation knew that the writers of Greece and Rome had thought and written so deeply and carefully about the polis (city-state) and about civitas (citizenship), had examined and explored those issues of morality, of psychology and of community, of civic responsibility and governance, which continue to engage and perplex us to this day," she said. "It is no accident that the study of classical languages and literatures have been continuously taught at Dickinson over its entire history."

The conference, organized by Assistant Professor of Classical Studies Scott Farrington, opened with a quiz-bowl style contest through which teams from various colleges put their knowledge of classical studies to the test in Allison Hall's Great Room. Next, research took center stage, with student presentations:

Rounding out the activities were a Latin declamation contest, a vase-painting workshop led by Assistant Professor of Art and Art History Rachel Eng, lectures on Caesar and the Battle of Alesia as well as mythology's connections to astronomy and a presentation of some of the "classical treasures" in the Trout Gallery's collections—including a chunk of the Parthenon and a denarius of Septimius Severus.

To Marc Mastrangelo, professor of classical studies, the event does more than illustrate that the classics are thriving and growing; it places Dickinson at the heart of the movement. "Dickinson's ability to attract such a conference," he said, "reflects the fact that we have one of the leading undergraduate departments in the country."