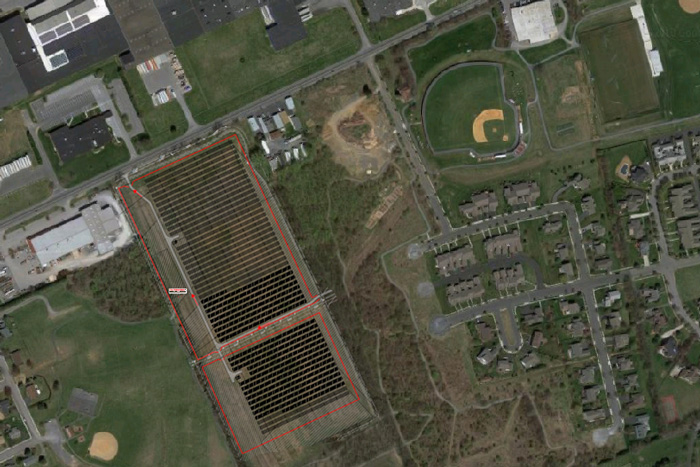 Dickinson College has something of a reputation for being a leader in sustainability. This is no big secret. Last year, the college was one of only 23 U.S. colleges and universities to make the Princeton Review’s Green Honor Roll, earning the highest possible score along the way. We also were once again lauded by Sierra magazine (“Cool Schools” list), Forbes magazine (Top Green College list) and the Chronicle of Higher Education (Top-Performing Institutions for Sustainability).

And while Dickinson already has sustainability baked into its facilities planning and infrastructure, a new 12-acre array of solar panels that broke ground last week at Dickinson Park is a big next step toward an ever-greener future.

“The solar project will reduce Dickinson’s carbon emissions by more than any other Climate Action Plan project to date,” says Associate Vice President for Sustainability & Facilities Planning Ken Shultes, noting that the project’s 12,456 panels represents about five panels per student. “If you think of it on a per-student basis, it will reduce each student’s carbon emissions by one metric ton per year.”

The system was designed and built by Tesla, and the company will own and maintain it through a 25-year contract. In turn, Dickinson will purchase the power the array generates and receive the carbon renewable energy credits. The new array will join existing solar set-ups at Kaufman Hall, Waidner-Spahr Library, the Treehouse, the Trellis and the College Farm.

But the Dickinson Park array is a whole new ballgame.

But don’t expect this embodiment of the future of energy production to have some sort of high-tech solution to keep the grass from growing up and through the hardware. Grazing sheep will serve as the grounds crew.