Playing Violin Among the Stars 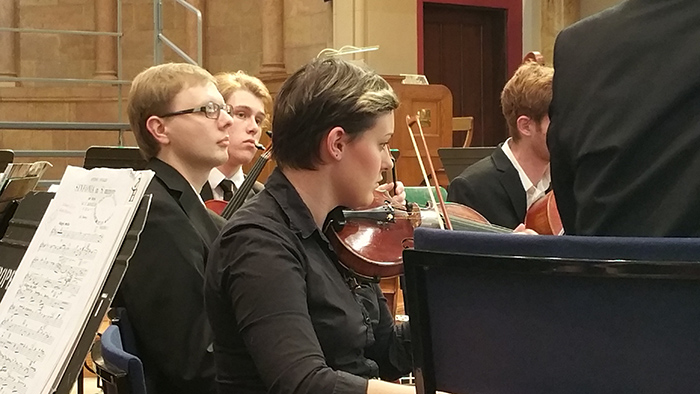 Leigh Parrott '18 attends Dickinson on a music scholarship and majors in English and East Asian studies. She's also passionate about science and travel.

Leigh Parrott ’18 attends Dickinson on a violin scholarship and has many other passions as well—science, literature, East Asian languages and culture, sewing, horses and travel. She’s found ways to deeply explore them all. Fresh from a study-abroad experience in Japan, she traveled to Poland during winter break to play violin with a professional Polish orchestra. Although she double majors in humanities subjects, she plans to continue to study the sciences as a postgrad, after perhaps teaching English abroad.

That’s too difficult a question.

I sat in on a Japanese class with [Associate] Professor [of Japanese Language & Literature] Alex Bates, who’s now one of my advisors. What sold me: the small classroom environment, students actively engaged with the content and the professor, and Dickinson’s fantastic complement of foreign languages.

The old chicken satay that existed until my junior year. The new Moroccan satay isn’t bad, but the old stuff with the peanut sauce? That was awesome.

I’ve always had an interest in studying languages, and based on my study of both English and Japanese, I decided that would be a good fit.

Astronomy, though I hate having to choose just one. I love being able to take classes in the sciences, despite being a double humanities major. It really brings the whole liberal-arts experience into perspective, and it’s encouraged me to further pursue the study of physics and astronomy in my postgrad work.

I’m a bit afraid to answer this question, because I’ve had so many phenomenal professors. I think it would have to be [Assistant] Professor [of English Chelsea] Skalak, or [Associate] Professor [of Physics & Astronomy Windsor] Morgan. Not only do I share academic interests with both of them, but they’ve both been incredibly encouraging this year—both in and outside the classroom—as I’ve struggled to figure my life out before I graduate. They’re both dedicated to their students’ success, and they impart knowledge in an engaging manner that makes us excited about what they’re teaching, because it’s clear that they both love their subject matter. Plus, we all have a fondness for Star Trek.

Don’t let anyone tell you that you have to choose between your passions. It’s okay to have multiple pursuits, as long as you keep things manageable.

I think I was too preoccupied with my many and various hobbies to give any one of them too much thought.

Probably singing. Or drawing. I do both, but since coming to college I haven’t really had time for either, at least not in academic pursuit. I’m also a seamstress, though more people know about that, I think.

I studied abroad in Nagoya, Aichi, Japan. I learned and grew so much, both as a student and as a person. The people I met there have truly become people I would consider lifelong friends, and spending time in a culture as different from America provided a humbling amount of perspective. Everything I experienced in Japan gave me a more global perspective, changing the way I look at the world, my country and myself, in only the best way. 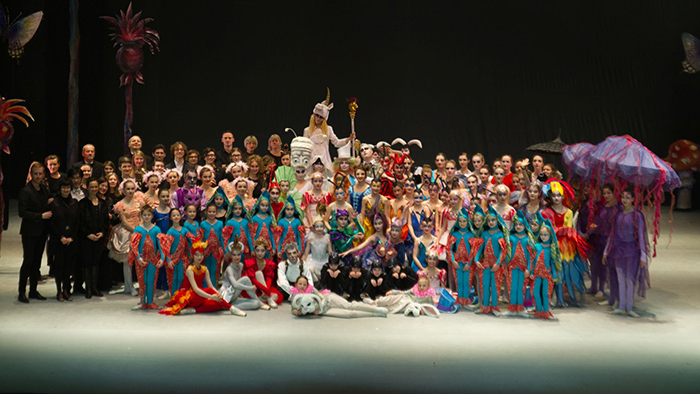 Violinists Leigh Parrott '18 and Max Jacobs '21 played in the orchestra pit for a Polish opera, as part of an international music tour.

I got funding to go to Poland in five or so days to play with Sinfonietta Polonia with my violin professor, [Associate] Professor [of Music Blanka] Bednarz. It’s a professional-level engagement, and we played a series of New Year concerts, capped off by a ballet at the end of the trip. The music is difficult and the rehearsal times are long, but it was an unforgettable experience filled with music, learning and cultural exchange,—three major things I’m passionate about.

… we’d have already discovered interstellar travel. Kidding! But seriously, is universal healthcare too much to ask?

Right now I’m looking into the JET (Japan Exchange and Teaching) program, but eventually I’d like to do some postbaccalaureate work in physics & astronomy, and go back to school for a master’s in astrophysics. Quite a change from a double humanities degree, but the education I’ve gotten at Dickinson and both of my current majors will, I expect, continue to play a vital role in whatever future career I may have. The problem is, and always has been, as my freshman year advisor told me many times, that I have far too many passionate interests to give any of them up entirely.

My grandmother. She and I are much of a muchness in terms of personality (especially stubbornness), and we share a deep, unfaltering love of learning. She also taught me how to sew, which has been a vital part of my life for the last sevenish years.