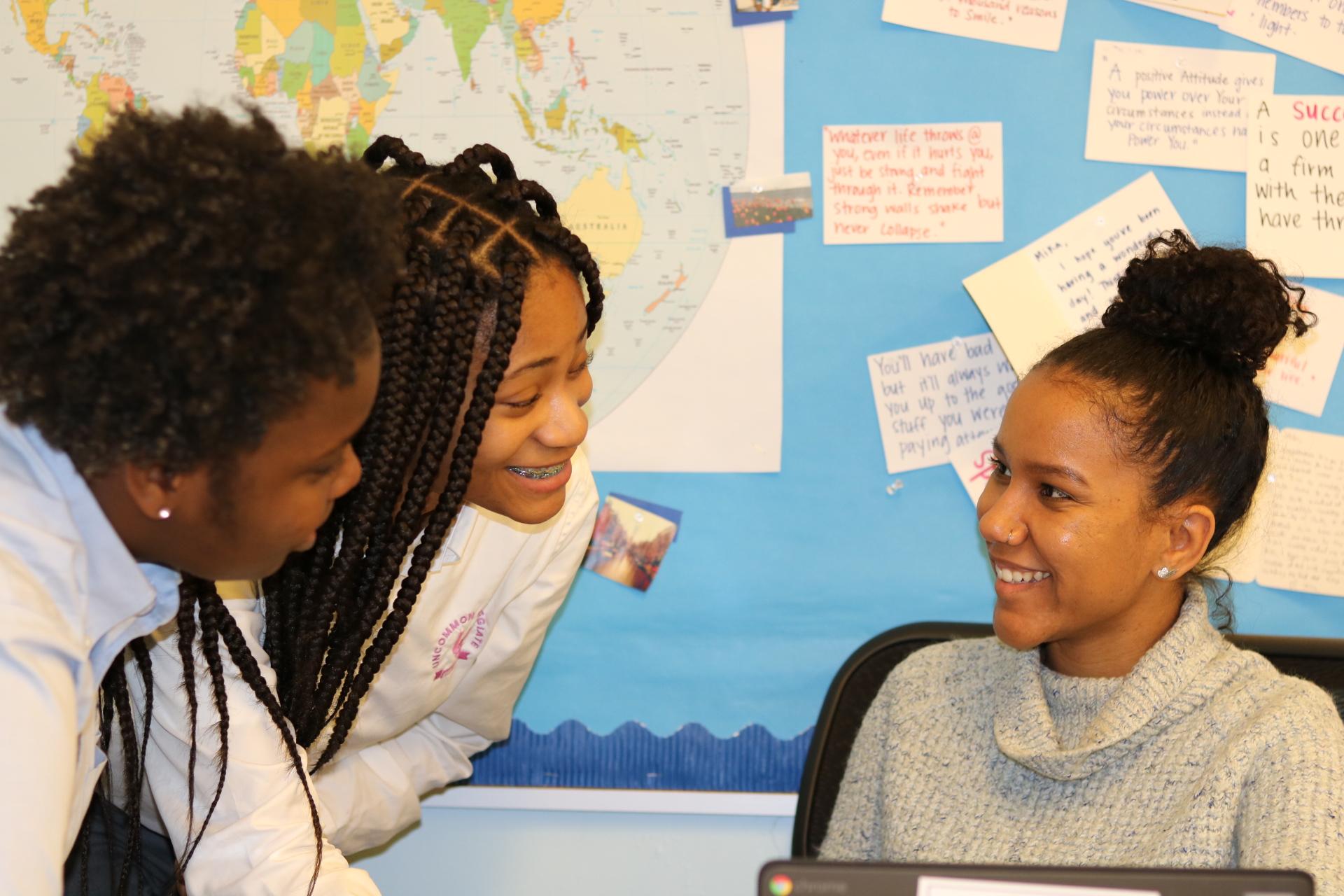 Former Posse student and English major Yamilka Roque ’15 shares her love of literature teaching eighth grade English at the American Dream Charter High School in New York City. In this bilingual environment, she strives to educate her students to become future leaders while using tools and techniques garnered from her useful education for the common good at Dickinson.

When I was in high school, I never imagined taking classes such as French or Music in Film during my college years. I thought my college years would entail reading Shakespeare and analyzing literature for four years, not traveling Europe and analyzing film by the end of my senior year. I have always loved reading and discussing texts—be it a novel, a play or a literary criticism. What I loved about Dickinson’s liberal-arts approach was being able to do just that—discuss, in all of my classes, including the ones I was required to take outside of my major. I walked away from Dickinson knowing that as an educator, I need to make sure my students have the platform to discuss not just texts but also issues going on in the communities around them in the country and in the world.

The Multi-Organization Board, hands down. This was the first organization I joined at Dickinson, and it was really the first space that allowed me to experience the true diversity of Dickinson College. By my sophomore year, I became the variety chair of the organization along with Andrew Dietz ’15. Having such a position for an organization on campus that so many students relied on for social activities helped me gain the leadership and organization skills I needed to be successful in any role.

Participating in the die-in organized by the Black Student Union, formerly known as the African American Society. The die-in was a protest to raise awareness about police brutality and protest the recent deaths of Michael Brown and Eric Garner. Having studied in Norwich, England, my entire junior year, it was a powerful experience to return to a community so passionate about issues. I, too, developed a passion and even a voice while abroad.

I’ve returned for every Commencement since I graduated from Dickinson in 2015. I was influenced by so many of the people in those classes. For the same reason, I will be returning for the class of 2018 as well! I also have returned for the Alumni of Color Conference, which my dear friend Brandon Goldson ’15 had a hand in creating, and I attended the performance of Brittany Barker ’15, “Black Girl Third Space: Standing Upright in the Crooked Room” at The Cube as the cast photographer. It’s important for me to be involved with Dickinson because I cannot ever—and will never—forget the people, programs and organizations that have molded me into the person I am today.

I became interested in teaching English when I discovered that I enjoy working with kids from my community, whether it’s kids from the Bronx or kids with upbringings similar to mine. This realization came when I interned as a Writing Teaching Fellow at Breakthrough New York, a 10-year long college access program, the summer before my senior year. Teaching students from my community excited and still excites me because every day I see what society tends to avoid seeing in them; I see them turning into leaders and change agents of the world.

I teach eighth grade English at the American Dream Charter High School. I also run my blog, Irradiateme.com, and try to post at least once a month until I find my groove.

When I studied abroad in England, I missed the Latino flare of the Bronx so much that I decided to join the Salsa Society at the University of East Anglia (UEA). I made lifelong friends who contributed to what was literally the best semester of my life. This past April, I joined the UEA Salsa Society on a salsa tour of Eastern Cuba. All of the members of the tour were from England. I met up with them in Guantanamo, Cuba, and the rest was history. I reunited with one of my greatest friends from Norwich, England, as well as my Cuban salsa teacher who taught me everything I know. If it were not for studying abroad, I would have never discovered my love for salsa dancing, Cuba and traveling in general.

Even after stepping away from this question for a bit, I still couldn’t think of a famous person with whom I’d want to have dinner. There are so many people in my life today that are not famous, but who have been just as impactful. If I had to choose someone I personally know, I would choose one of my greatest friends; she’s actually in my Posse, but dinner between us is long overdue. She’s honest, bold, thoughtful, innovative, an activist, empowering, confident—and because of her, I am better. Shout out to Brittany Barker ’15.

I’d go to Yauco, Puerto Rico; my mother’s side of the family is from there. I lived there for about a year in total when I was a kid. I moved around a lot, but I remember attending first and third grade there. It was truly the most adventurous, carefree and blissful time of my life.

You’re going to live on an island by yourself for a year: what books, albums, and movies do you take with you?

I can watch Pretty Woman and The Parent Trap a gazillion times without getting tired, so definitely those two movies. I can’t stick to just one album, so I’d cheat and bring a mixtape with the best salsa, bachata, merengue, reggaeton, hip-hop, rap, R&B and alternative songs of the decade. As for books, The Perks of Being a Wallflower and The Farming of Bones.

That I had gone to Nicaragua to build a school when I was offered the opportunity in high school. I had to decide whether to accept this once in a lifetime opportunity and take a few weeks off school or stay in school and prepare for my AP calc and U.S history exams. Looking back, I wish I had listened to my heart.