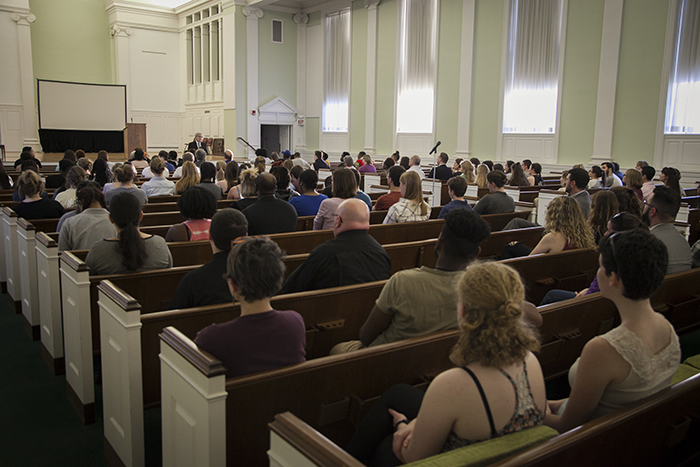 Nearly 200 students, faculty and staff members gathered in Allison Hall on Feb. 24 to honor the memory of Legacy Watkins '18. Photo by Joe O'Neill.

Legacy Watkins ’18’s dream was to someday pay forward the encouragement she’d received by educating and inspiring others. During a Feb. 24 memorial service at Dickinson, it was clear that she’d already sown a good deal of inspiration in her young life, and that her absence is profoundly felt.

The memorial service, held Friday afternoon in Allison Hall, brought students, faculty and administrators together to honor and remember Watkins, who fell ill and recently passed away while studying abroad in Cameroon.

“She was like sunshine, a bright light,” said Donna Hughes, director of the Center for Service, Spirituality & Social Justice, one of several administrators who worked closely with Watkins throughout her time on campus. “She was a joy and pleasure to be around.”

In high school, Watkins took part in the New Jersey SEEDS College Preparatory Program, an intensive, three-year commitment that included Saturday sessions and two weeks of study during the summer. Along with fellow college-bound SEEDS graduates, she was featured on a billboard in her native Trenton, N.J., as part of a campaign to inspire young at-risk students to pursue educational opportunities. That year, she was also one of eight Trenton Central High School students who were publicly recognized for good citizenship.

Watkins demonstrated her commitment to that cause from her very first day at Dickinson, when she took part in a community-service First-Year Interest Group. She declared an Africana studies major and was very active on campus, working in Dining Services, at the Waidner-Spahr Library and as a CommServ leader, and joining the Black Student Union and MOB. As a multicultural ambassador for the Office of Admissions, she took visiting high school students under her wing, making sure they were well informed about her favorite hotspots and activities.

A sophomore-year class project brought Watkins in touch with Hope Station, a local nonprofit serving at-risk families, and as part of that project, she helped teach local youth how to select and prepare healthy food. After the semester ended, Watkins founded Keep Hope, a student community-service program that continued this mission.

The Feb. 24 service was the second of three campus events in Watkins’ honor—the first was a Thursday-evening candlelight vigil; the third is planned for a later date—and it was live-streamed from Allison Hall so Watkins’ family, and her friends in Cameroon, could take part.

It began with a moment of silent reflection and remarks by Hughes and by interim President Neil Weissman, who asked Watkins’ friends and mentors to keep her memory alive, seek comfort in community and “support each other through this time of great grief.”

Burleigh-Jones, a mentor whom Watkins nicknamed her “Dickinson mom,” described Watkins as “a part of my heart” and noted, “she was so happy, and she was just starting to soar.” Johnson, who taught the course that inspired Watkins to declare an Africana studies major, expressed the sorrow among students and faculty in that close-knit department. She then read a letter from Watkins' friends in Cameroon, who recalled her excitement and love of the West African country and the “positive energy and laughter” she brought to all she met there.

The memorial service also included moving remembrances by Watkins’ cousin, a student at a nearby college, and by Watkins’ friends, who described her as “a beautiful soul” and an effervescent and loving young woman who “made friends instantly” and “brought everyone together, and made everyone laugh.” Two students noted that Watkins took great pride in being a two-time winner of the annual "Shimmy Like a Nupe" competition, sponsored by Kappa Alpha Psi.

“Legacy was so well-loved on our campus—not just by students, but also by staff and faculty members—and I’ve seen a lot of people who are hurting, and also a lot of people coming together in support,” said Don Domenici, associate director of counseling and psychiatric services, who reminded students that Dickinson’s Wellness Center staff is available through open hours and scheduled appointments. Students seeking support at this difficult time may also reach out to Center for Service, Spirituality & Social Justice, faculty and staff mentors, college deans, RAs or residence life staff.

“This is a powerful opportunity to give each other strength and hope,” Hughes agreed. “As we reflect as a community, remember the light Legacy brought and live it in your own lives. Share it with others.”