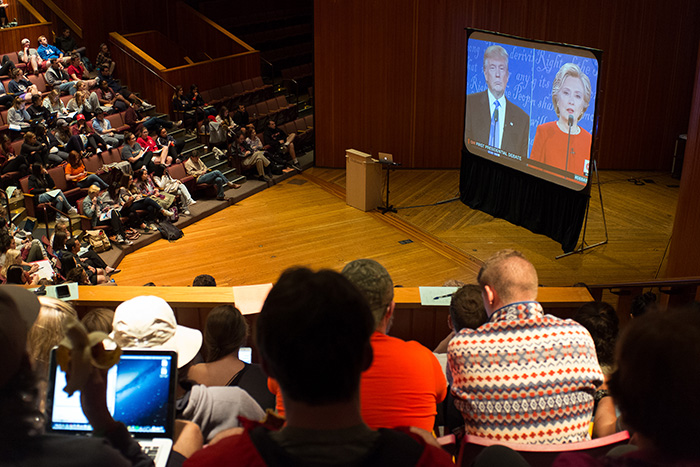 From body-language oddities to sweater-clad voters to the spotlight-loving insect that landed on the Democratic nominee, there were plenty of entertaining on-stage distractions during the last U.S. presidential debate. But for many viewers, it was what happened off the TV screen—and in that night's roughly 94 million related Facebook posts, likes and shares and 17 million related tweets—that truly stole the show. So as we gear up for the final debate on Wednesday night, we might wonder: Does real-time social-media event commentary influence the way that we digest and understand the unfolding events? And if so, to what extent?

Assistant Professor of Political Science Sarah Niebler will take on that topic and more during an informal lecture, Real-Time Research: Implications of an Unfolding Election. The event will be held Oct. 19, 4:30 p.m., in the Waidner-Spahr Library's Biblio Café.

The co-author of a 2015 article on the ways that social media influences responses to television campaign ads, Niebler got the idea to focus next on televised presidential debates while watching the major parties’ primaries on television last spring. “At one point I realized that because I was reading Twitter simultaneously, I wasn’t forming my own opinions on what the candidates were saying, because I didn’t have time to think of it on my own,” she says, “and I began to wonder about the differences in how people understand what happens during a debate when they look at social media in real time, versus when they don’t. Do people have more extreme responses, in terms of who they thought they won, if they are reading others’ opinions in real time?”

Working in partnership with Assistant Professor of Political Science David O’Connell, Niebler devised color-coded pre- and post-debate questionnaires and distributed them to students who attended the first presidential debate watch party on campus. Students who received red questionnaires were asked to refrain from checking their smartphones throughout the debate, while students with green questionnaires received no special instructions.

Niebler's Oct. 19 lecture on the ongoing pilot study and past related findings is part of Dickinson’s FaculTea series, which brings campus-community members together to learn about current and recent faculty research. The next FacuTea lecture, led by Marc Mastrangelo, professor of classical studies, is slated for Nov. 12 in the Biblio. The library also hosted a Sept. 21 StudenTea, highlighting summer internships and student-faculty research by Eleanor Weaver ’17, Katherine Anne DeBroeck ’18 and Rinaldis Castillo ’17.