Outing Club Gears Up With the Gear Box 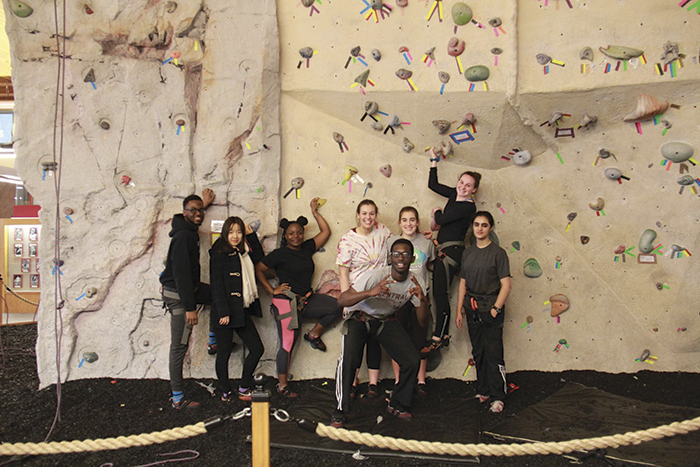 From the climbing wall in the Kline Center to weeklong excursions in the White Mountains, the campus' new Gear Box has all the equipment students will need for indoor/outdoor adventures.

Dickinsonians with a love for outdoor adventure but not enough room in their cars for equipment—or anyone on campus who wants to learn new skills—can now stop by the Gear Box, the college’s new outdoor recreation and education room. Opened in February and housed in Allison Hall’s lower level, the room is a  cornucopia of skiing, camping, boating and climbing paraphernalia.

The space is just one of the many ways Dickinson takes advantage of its location amidst a host of outdoor opportunities. The surrounding Cumberland Valley region is home to world-class trout streams, spectacular mountain views, state parks and abundant walking and hiking venues. This includes a 13-mile stretch of the Appalachian Trail, and other sites like Pine Grove Furnace and Waggoner’s Gap are also nearby.

A recent addition to the Gear Box was a large collection of cross-country skis, courtesy of a ski shop in New Hampshire. Anna McGinn ’14, the Office of Student Life’s coordinator for campus recreational programs, grew up nearby and knew that the shop sold off its like-new rental gear at the end of each season, so she  swooped in.

“President [Nancy] Roseman is a big supporter of outdoor education, so when we approached her about purchasing this fleet of cross-country skis, she was all in, making it all possible,” McGinn says. The rest was funded by the Outing Club and Office of Student Life.

The Outing Club, with more than 150 members, gets a lot of use out of the equipment, and McGinn notes that members of that club worked diligently to secure  both the stockpile of gear and the new space. “The Outing Club is the most vital piece of the outdoor education puzzle,” she says, “as they keep trips running every week and build a community of students who are passionate about the outdoors.”

McGinn and Outing Club members also have introduced students who have never been on skis, or even outdoors very often, to the joys of cross-country skiing and other activities. From workshops at the Emerging Leaders Retreat and with a first-year outdoor leadership group, to an intensive leadership training week in the White Mountains during spring break, the skis have hit the trails about 200 times since the Gear Box opened.

Students, faculty and staff also have checked out sleeping bags for service trips and research expeditions around the world. Alumni in the Carlisle area or visiting the campus are welcome at the Gear Box, as well. “The hope is that this can be a resource for all kinds of programming run by the college, as well as adventures that students plan for themselves,” says McGinn. “Just hearing people come in and say, ‘This is so cool!’ and ‘I’m gonna come in here all the time’—that just makes me so excited.”