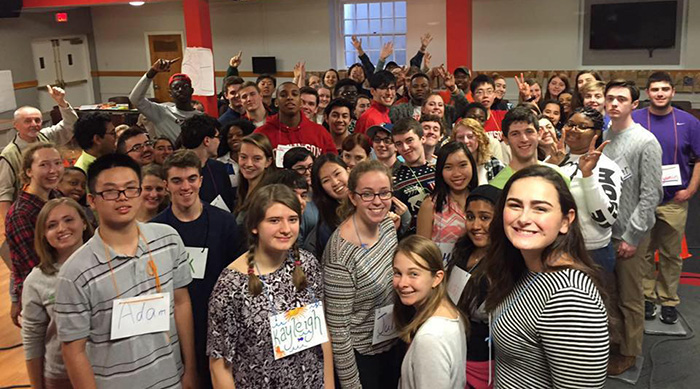 What do you get when you combine 70 first-year students, Toy Story and root beer kegs? Ask Josh Eisenberg, director of student leadership & campus engagement (SLCE), and his answer is simple: a better campus.

All of these things came together in the days before spring semester began as part of Dickinson’s Emerging Leaders Retreat (ELR). The program, started in 1990, targets potential leaders from the first-year class and focuses on the principles of leadership, collaboration, creativity and connections. For a time, coordinators switched from the ELR program to LeaderShape, a well-respected national program. It could not accommodate the number of students nominated, however, and Eisenberg wanted a more flexible, Dickinson-tailored program. “Sometimes we forget that we’re a small college and we have these opportunities,” says Eisenberg, who prefers large cohorts so the maximum number of students can participate.

The program encompasses three days, and first-years participate in group activities that encourage relationship building among an otherwise diverse group of students. Students do a selected reading as a basis of discussion; this year, they learned about Ed Catmull, one of the founders of Pixar, and then examined leadership in the Pixar-produced animated film Toy Story. The retreat also features a programming competition, and the winning team receives funding from Student Senate to implement its idea. This year’s winning program includes mechanical bulls, root beer kegs and chicken wings for a night of fun in the Allison Hall Community Room.

Students also take time to self-reflect. Group exercises like “Iceberg” and “Step into the Circle” force students to think about who they are to the world and how they connect with others. Vice President and Dean of Student Life Joyce Bylander also used her “I Am Becoming” poetry exercise to encourage students to think about who they will become during their four years at Dickinson. Mentorship, on several levels, is the final key to a successful three days. Student mentors help lead the program, and Eisenberg and his team make sure that at least half are not graduates of previous ELRs.

“We want to show people that you can be a leader and you can do awesome things on this campus, even if you have never been in this program,” he explains. Every student mentor also chooses his or her own campus mentor, from coaches to faculty to admissions staff, and has a meal with a group of ELR students and that mentor.

The recognition of mentorship and leadership potential is the end goal of the program. Campus mentors are able to see how important their role is, while student mentors hone their skills. First-year participants also discover that leadership is a skill to be learned and that they can have an immediate impact on campus.

As Eisenberg notes, “If you have people who are better at programming, better at leading, better at collaboration, we’re going to be a better college.”