In the Thick of It All 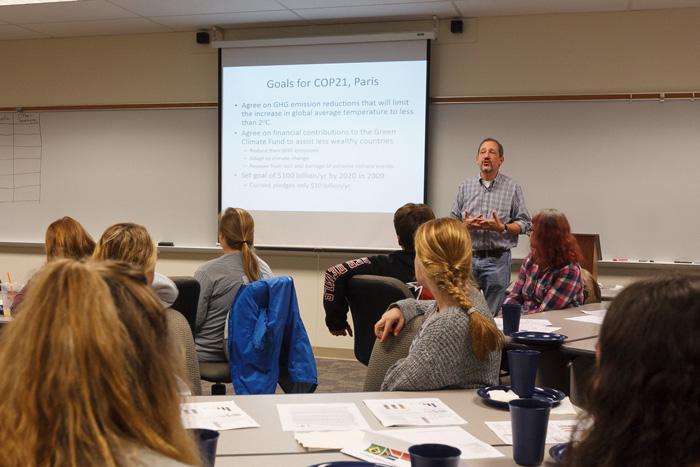 Neil Leary, directory of the Center for Sustainability Education, leads a COP21 simulation for a First-Year Seminar the week before the event in Paris. Photo by Carl Socolow '77.

Dickinson delegation heads to Paris for COP21, joining leaders from around the globe

Joining them is a contingent from Dickinson, including Neil Leary, directory of the Center for Sustainability Education, four Dickinson alumni and two current students.

COP21 is an annual climate change conference that this year is expected to host upward of 30,000 delegates from government, intergovernmental organizations, U.N. agencies, NGOs and observer organizations.

According to Leary, the outlines of the agreement that has emerged in the months leading up to the Paris conference will fall short of the announced goal of keeping global warming below 2°C. But regardless, he notes, the conference is seen as a catalyst for a fundamental shift in climate action by eliciting substantive actions from all nations, including the United States, China, India and other nations that had no commitments under the Kyoto Protocol of 1997.

On Saturday, Dec. 5, Dickinson, one of those observer organizations, will host “Climate Action: Engaging the Next Generation,” a 90-minute conversation featuring such environmental luminaries as Bill McKibben and James Balog, both recipients of the Sam Rose ’58 and Julie Walters Prize at Dickinson College for Global Environmental Activism, and John Adams, founder of Natural Resources Defense Council.

“The event is geared toward getting young people thinking about what their role is, what are they going to be doing on these broad issues, like climate change, like biodiversity loss, like poverty, like hunger,” Leary explains. “We’re keying on how students can move from being observers to becoming active participants in solutions, even building a movement beyond their individual activities.”

With that goal, and through the aegis of Camp Climate, the event will feature remarks by Leary, Anna McGinn ’14 and Elizabeth Plascencia ’16 (earth sciences). Also attending COP21 will be Tim Damon ’12, Sarah Ganong ’13, Sam Pollan ’14 and Keziah Groth-Tuft ’17 (international studies).

Dickinson’s COP21 blog is already underway, with Plascencia taking the reins, and if her Day 1 entry is any indication, it’s going to be an experience to remember.

“The energy at the conference is out of this world,” she writes. “I met people from Madagascar, Mexico, Congo, Norway, Sweden, France, Germany, Poland, China, etc. … A truly global perspective on a global issue.”

Continuing the legacy of involvement

All but one of the student and alumni delegates have attended a COP in the past as participants in Dickinson’s Global Climate Change Mosaic, either in Durban, South Africa (2011), or in Lima, Peru (2014), and the alumni have taken the mission with them beyond the limestone walls of Dickinson:

To keep up-to-date on the latest developments in Paris, check in with the Dickinson blog, Perspectives on COP21.