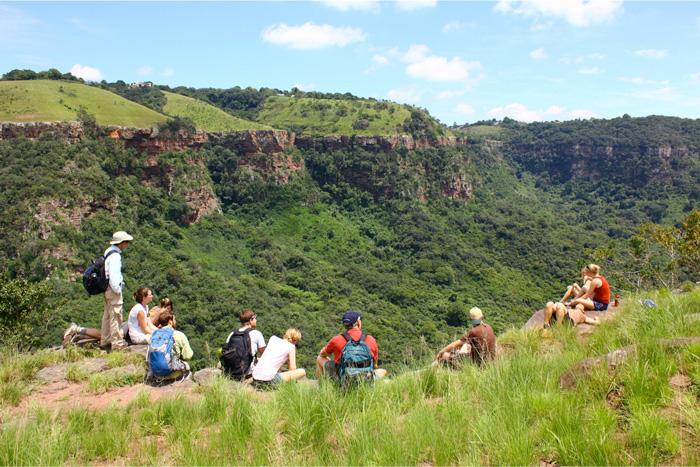 After COP17 in Durban, South Africa, students hiked in the Valley of 1,000 Hills. Photo courtesy of Neil Leary.

New Mosaic takes on climate change, from Carlisle to Lima

The multiple dimensions of climate change will be open for examination as part of Dickinson’s 2014 Global Climate Change Mosaic. Following intensive class work, students in this unique interdisciplinary program will attend the 20th Conference of the Parties (COP20) to the United Nations Framework Convention on Climate Change in Lima, Peru.

“It’s a once-in-a-lifetime opportunity for these students,” says Jeff Niemitz, professor of earth sciences, who is taking on his second global Mosaic. “And the semester may be one of the hardest but most rewarding of their time at Dickinson.”

Dickinson students last attended COP17, which took place in Durban, South Africa, in 2011, and Neil Leary, director of the Center for Sustainability Education (CSE), hopes the trip to Lima in late November will provide an equally rich, hands-on experience.

“It's one thing to read that the government of Kiribati, a small island nation at risk from sea-level rise, is advocating for tighter limits on climate-changing greenhouse-gas emissions than most other nations,” he says. “It's another to speak directly with inhabitants of that island, to hear their fears about what will happen to their home if they fail.”

Students will meet various stakeholders, among them negotiators who struggle to find common ground on issues swirling around climate change. Through interviews with participants, students will gain valuable firsthand knowledge of the goals, values and priorities of those involved in climate negotiations.

"A lot of my friends did COP17, and it changed their lives," says Justin McCarty '15, one of the Mosaic's 14 participants. "These events are defining moments in our global civilization, and I'm excited to be a part of that."

“If the Durban conference is any indicator of what the students will learn, they’ll have a new appreciation for how very difficult it is to solve global problems in a timely fashion when 195 countries, literally, are involved in the negotiations,” says Niemitz, noting the “astounding” level of compromise needed among developed, developing and underdeveloped countries to make headway on the issues at hand.

Students—majoring in anthropology archaeology, economics, earth sciences, environmental science, environmental studies, international studies and Latin American-Latino-Caribbean studies—will collect their observations and use the interviews they conduct to craft research papers upon their return. With the intense level of interaction and the sheer number of events, the source material could be as varied as the approaches to addressing climate change, and it’s an experience students won’t likely soon forget.