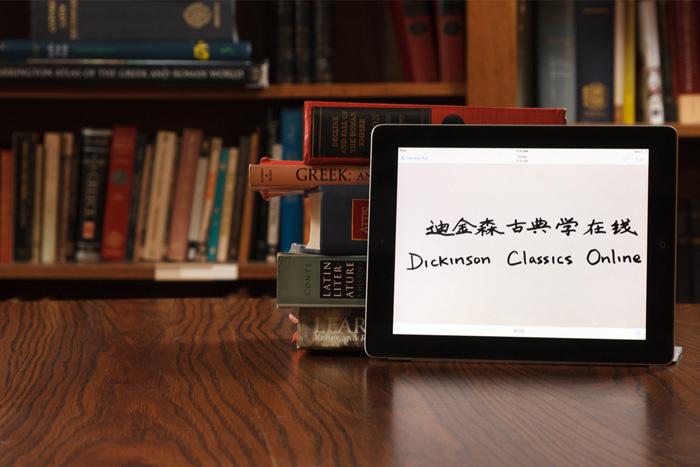 There are about 1.5 billion people in China, and tens of millions of those people are students and scholars at nearly 3,000 colleges and universities. So it might come as a surprise to find that some significant works from the Greco-Roman classics have never been translated into Chinese and that tools for learning Latin and Greek are hard to find.

Now, Dickinson professors are collaborating with scholars of the Western classics in China on a new digital humanities project to create language-learning tools and accurate translations, along with commentaries from a Chinese perspective.

“This is big,” says Marc Mastrangelo, professor of classical studies, who, along with Asbury J. Clarke Professor of Classical Studies Chris Francese, recently returned from China and is spearheading the new initiative, called Dickinson Classics Online (DCO). “This is a 25-year project where, if we’re successful, we’ll help to globalize a Western academic discipline on a scale that's never been seen before.”

Mastrangelo and Francese are leading a group of U.S. scholars—including three previous Roberts Lecturers from the University of Chicago and Stanford and Harvard universities—and were introduced to scholars in China via Jinyu Liu, associate professor and classics department chair at DePauw University. Liu also has been granted a Distinguished Guest Professorship at Shanghai Normal University, the institution that hosted the contingent of American-born and Chinese-born classicists for the groundbreaking conference.

The latest example of the kind of international collaboration that is the norm at Dickinson, DCO is an offshoot of the Dickinson College Commentaries (DCC), an ever-evolving online resource for students and scholars of the humanities worldwide. Now the same spirit of scholarly exploration and knowledge sharing that has propelled DCC will touch a vast new audience.

“This collaboration with Chinese scholars creates the infrastructure for a new Renaissance in classical studies,” Francese says, noting that the heart of the project lies in building a virtual space for Chinese scholars to create resources and tools that will help their students cultivate their own academic and intellectual culture. “The West has a great deal to learn not just from the Chinese classics but from Chinese ways of reading and interpreting their own classics. DCO creates a venue for what we expect will be a very fertile intercultural dialogue, as Chinese scholars bring their own perspectives and ways of reading to the Western classics as well.”

Back to the basics

Francese cites a growing interest in the Western classical tradition in China, coming in the wake of the explosion of Chinese intellectual life over the past few decades. But the tools of intellectual exploration—which include basics such as grammar guides and Latin and Greek/Chinese dictionaries—are missing, hampering the next wave of that explosion.

"I went to a Chinese bookstore to find every book I could on Latin and Greek, and it was a stack about two feet high,” Francese says. “In any American city, there's going to be hundreds and hundreds of books.”

Siyun Yan ’18, from Nantong, Jiangsu, was in China for the project’s kickoff conference, and she sees the foundation being built by the project as a necessity.

“For me as a student, the most practical thing is that now we have a Chinese version of Latin and Greek core vocabulary on the DCC website,” she says. “I've met some Chinese students who're learning Latin or Greek, [and] after knowing their experience, I feel very lucky to study Latin in a place where the resources are relatively more abundant.”

Of course, the texts those resources set out to decode come infused with an inherently Western ethos, something left behind across the years.

“Many existing Chinese translations of classical texts come from an antidemocratic school of thought,” Francese says, calling out translations that emphasize Confucianist traditionalism and subordination of the individual to the collective. “And truer, more just interpretations are just not available.” He adds that with more access to scholarly and pedagogical materials, Chinese students and scholars will enter more easily the conversation about the meaning of Western political and intellectual traditions.

“Our interest here is pure knowledge dissemination, stripped of any political agendas,” Mastrangelo says. “We feel that if we give scholars the good tools, there will be enough people to get to the right answers, and they’ll take the discussion in new and exciting directions.”

With funding from an existing Andrew W. Mellon Foundation grant, Dickinson’s Christopher Roberts Fund and the Guangqi International Center for Scholars at Shanghai Normal University—now the institutional home of DCO in China—the project launched with the summer 2015 conference in Shanghai. There, the gathered scholars decided how the project should proceed and what educational materials would form its foundation. Now it shifts toward its fully online segment.

To start, the website will include “easy readers,” which will comprise sections of classic texts translated into Chinese—such as those of Plato and Cicero—a grammar guide; and thematic primers on topics such as democracy and Greek and Roman history. And it’ll be open to anyone with Internet access.

“It's really about scholarly collaboration that doesn't happen in a print environment,” Francese says. “Because we're doing this in an open, Web-based format, the level of participation jumps way up from all levels of the community.”

Mastrangelo says that the first job of the classicist has always been to furnish reliable texts and interpretations of ancient authors based on sound scholarship. Now that accuracy is being established, he sees progress for not just current students but also those not even born yet.

“In China we're now forming those vocabulary lists, we're forming those texts and commentaries that a whole future of students and scholars are going to use, hopefully for generations,” he says. “That's what's exciting about it, and maybe it'll bring some meaningful understanding between us. The possibilities are great.”