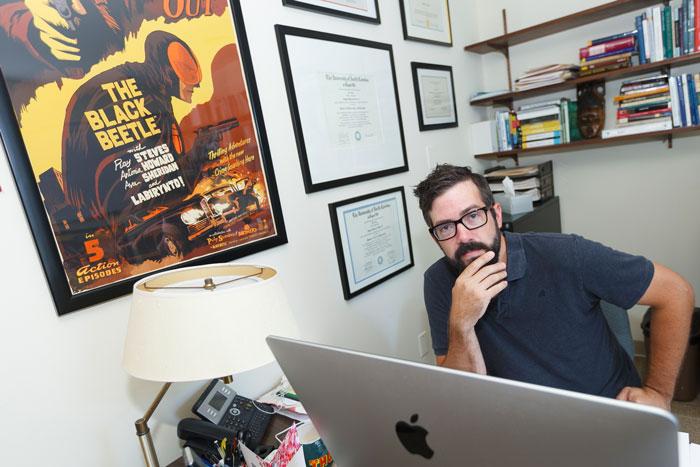 From real evil to that portrayed on the pages of comic books, a thread has formed for Assistant Professor of Philosophy Jim Sias

Back in spring 2014, Jim Sias, assistant professor of philosophy, was teaching a course on moral psychology. About to dive into a three-week unit on psychopaths, he had students write down their answers to this question: Is there such a thing as an evil person?

Of the 13 students in the class, 11 said no, there is no such thing as an evil person.

“The remaining two gave me definitions of evil that were so high-stakes and so demanding that even by their own admission probably no one in history has ever been evil,” says Sias. “Not even Hitler.” The response caught Sias off-guard, and an idea was born.

Now Sias’ book, The Meaning of Evil, is being prepped for publication by Palgrave Macmillan, and his philosophical studies lean full time toward evil, ethics and moral psychology. But still he says, “It's weird to be writing a book about it, because it was relatively recently that I got interested in the topic of evil specifically.”

As anyone could guess, the subject has provided plenty to hold his interest, and theories of who is or isn’t evil might rile someone not so well-versed.

“Apparently Hitler was incredibly soft and compassionate toward dogs, and some theorize that you have to be evil through and through to be evil,” Sias says. “So if you happen to be a genocidal maniac who does sweet things for your spouse, you wouldn't count as evil in some theories. Well, that just strikes me as implausible.”

On that other side of that coin are those who are easily labeled evil but who Sias thinks might not be. Take James Holmes, who killed 12 people in a movie theater in Aurora, Colo., in 2012 and was subsequently evaluated by several psychiatrists.

“Five or six diagnosed at least schizophrenic tendencies if not straightforward schizophrenia, in addition to bipolar and other issues,” Sias says. “So he's a case in which I'm inclined to say, probably not evil. But, even if we deny that a person is evil, we're still permitted conceptually to say that they've done something of the most extreme form of moral wrong, an evil thing.”

But when he’s not thinking about the heart of darkness …

One has to wonder if Sias’ love of comic books laid the foundation for a fascination with evil, with moral right and wrong, as the genre is filled with villains and heroes battling for the moral high ground.

“Art and comics became an escape for me when I was a kid and have always been a part of my life,” says Sias. So it was natural that when he was looking for a way to bond with his son James, who was three at the time, Sias turned to comics. “I brought some comics into the house, and he just lit up,” he says, citing a stack of “vintage Marvel” comics he unearthed from his collection. “And for the next couple of years, that was our thing.”

Sias, a self-trained artist, has recently turned his own skills toward illustrations for a colleague’s new book—Associate Professor of Philosophy Chauncey Maher’s upcoming Plant Minds—for which he’s been commissioned to create nearly 40 original drawings. He’s also slowly decorating the houses of other fellow faculty members, as three of his Chuck Close-inspired works hang in living rooms around Carlisle.

When he’s not hunched over a pad of paper, reading a comic with his kids—which now includes daughter Campbell (4) and son John Mac (2)—Sias is, of course, often in a Dickinson classroom, asking students difficult questions.

“One of the reasons I do ethics is that I feel like, if nothing else, I'm teaching students how to think more carefully about decisions that they make on a daily basis,” he says. “So the examples and analogies and cases that we discuss in class are specifically chosen for their everyday feel, instead of something like the Holocaust, because thankfully these students aren't going to ever face something that ... crazy.”