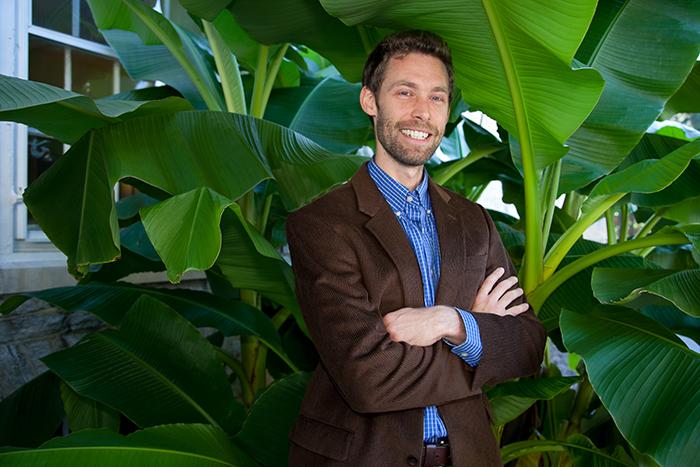 One of them is probably near you right now, menacingly probing your presence while you read this article. Look at it there: silent, leafy, rooted in that clay pot, communicating constantly with its plant brethren using a vocabulary of thousands of volatile chemicals. Wait, what?

OK, but seriously, plants are a lot more complicated than you might think. And, according to Associate Professor of Philosophy Chauncey Maher, they’re a lot more complicated than many philosophers think.
“It seemed like the tradition in a lot of philosophical thinking just kind of ignored how cool life is,” Maher says. “What has to happen for even the most primitive or basic source of life to keep itself going and what it does in order to do that is kind of amazing.”
Rather than merely growing and photosynthesizing, plants actively communicate and interact with each other and their environments. Some plant biologists even have gone so far as to say that plants—and not just humans and philosophers—have minds. Entering the conversation, Maher's forthcoming book Plant Minds addresses the debate about what counts as a mind, what lifeforms have one and what the answers to those questions mean for plants.
Maher, whose research interests are language and theory of mind, notes that respected philosophers and thinkers since the days of Aristotle have held that plants may in fact have minds.
“I had professional experience with this area called philosophy of mind: What is a mind? Who has a mind? What kind of things can have a mind?” Maher goes on. “And a couple really famous philosophers, contemporary famous philosophers, seem to think that plants have minds.”
Plant Minds presents compelling evidence that plants’ behavior is not just rote or stimulus-response. From gravitropism (how plants “know” which way is up) to chemotropism (e.g., bananas ripening more quickly when neighbors ripen), plants seem to be conscious of their surroundings. But does that mean vegetal life has a mental component?
"My honest opinion at this point is that I don't really think that plants have minds," Maher says. "But I do think what's really worthwhile is to explain why they don't have minds and why, ultimately, it's not helpful [for plant biologists] to talk” as if plants do.
Maher does not intend for his new ideas and explanations to sit idle. The burgeoning field of plant signaling and behavior—whose potential applications stretch from reducing pesticide use to improved crop yields—may benefit from more careful, creative rationales for describing the impressive things that plants do.
The germ for the book, he explains, came from grafting his existing philosophical knowledge onto a budding, nonacademic interest in biology. What was at first recreational reading ended up changing how he read philosophy.
“I became kind of mesmerized by how complicated living things are,” says Maher. “The things that philosophers think seemed kind of naive or uninformed relative to what biology as a science has accomplished.”
His biological interests then confronted a skeptical mind: Reading philosophers whose ideas implied that the verdant masses were, in some way, mindful, Maher first recoiled. But then he questioned.
“Why do I think that? If someone asked, ‘Why are you so sure that plants don’t have minds?’ what would I say?” He laughs. “It just sounds like prejudice.”
But if plants have minds, wouldn’t that mean humans are less special? On this point, Maher is reassuring.
“No! No one’s saying that plants are going to have offices and paintings and desks,” he says. “But they’re doing something that sits on a spectrum of what we generally do,” at least somewhere above the level of, say, puddles and rocks.

So be careful of that ficus behind you. Depending on how you talk about it, it is—in some ways—being mindful back.

Tony Moore contributed to this story.