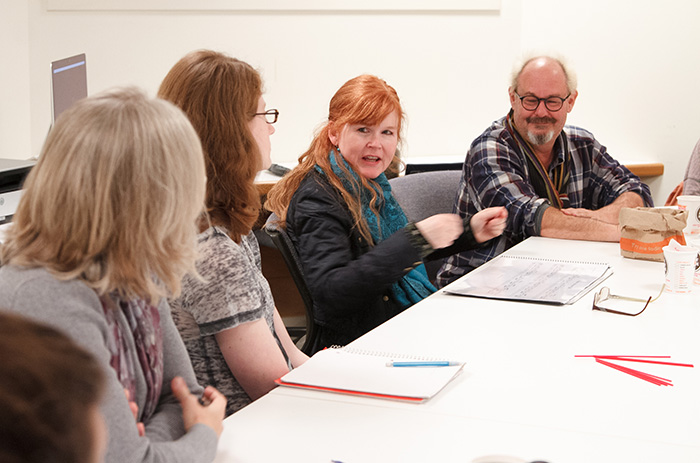 Branded by The New York Times as “fiercely gifted” and “an intrepid illuminator of the classical avant-garde,” Cahill is a San Francisco-based pianist, professor (San Francisco Conservatory) and classical-music radio personality who has premiered piano music by some of this century’s most influential composers. Her most recent project, A Sweeter Music, showcases works by 18 composers, including Frederic Rzewski, Bernice Johnson Reagon, Yoko Ono, Terry Riley, Meredith Monk, Pauline Oliveros, Mamoru Fujieda and The Residents.

Sanborn is an award-winning video artist and media-marketing executive whose works have been shown at the Museum of Modern Art and the Kitchen (New York), the Tate Modern (London) and the Centre Pompidou (Paris) and featured in more than 50 international film festivals. He also has directed programs for PBS, Comedy Central and the National Lampoon Network and has worked as creative director for Comedy Central, eBay and Shutterfly.

During their week on campus, Cahill and Sanborn met with students in and out of the classroom. They also presented a live, public performance in the Rubendall Recital Hall.

Cahill launched the week with a faculty-led music-outreach program at the nearby Wilson Middle School and then headed a piano master class and a professional-development lunch with students interested in music-related careers. Sanborn, meanwhile, screened videos for music and film students, visited Associate Professor of Art Todd Arsenault 99’s digital-art class, discussed career strategies with students involved with the Idea Fund and with those enrolled in the Eco-E Path Mosaic, and delivered an interactive lecture to students in an international business & management (IB&M) class, Creativity and Business.

For students in theatre, art and music classes, Sanborn and Cahill led joint discussions on visual and music performance, art installations and politics in art. The residency ended with the Friday-evening concert of A Sweeter Music, the couple’s first large-scale artistic collaboration, which premiered in 2009 and features performances by Cahill and nine accompanying videos by Sanborn.

Anna Leistikow ’15, a double major in international studies and German, attended the arts-careers luncheon. She said that Sanborn’s messages regarding the importance of communication and of stakeholder and community input resonated with her experiences as an Idea Fund student-leader.

“He also spoke very compellingly about the need to integrate different passions and ideas, as well as about the importance of connecting your work to a larger goal,” she said, explaining that Sanborn’s big-picture view allowed him to remain centered throughout the inevitable periods of frustration. “It was really interesting and reassuring [to hear] that the creative process—in both professional art and business—truly does take a long time, and that often, those projects click or work seemingly all of a sudden.”

The luncheon also offered a slice of affirmation for Travis Lipscomb ’17. “It was a great opportunity to learn how two seemingly unrelated subjects come together in the real world,” the studio-art/IB&M major said.

Lucas Kang ’16, an art & art history major, encountered the artists-in-residence through his art-history class. “It was interesting to meet them both, because they are married artists who inform and affect each other’s work,” he noted. But the message that hit close to home, he said, “was that you never know how and in what ways your [artistic and professional] experiences will affect your future. John Sanborn’s career was varied, and even though at times he was not always producing art, he always came back to it.”