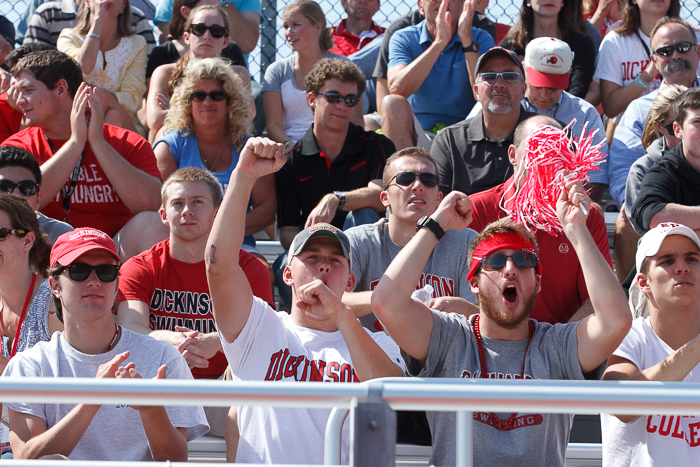 The Dickinson football team gave the Homecoming & Family Weekend crowd something to cheer about with a thrilling, come-from-behind victory on Saturday. The Red Devils scored 20 points in the final 8:37 to overtake Susquehanna University, 29-28. Photo by Carl Socolow '77.

While the bonds that connect us are forged by our shared passions and experiences, they’re enriched by our individual backgrounds and beliefs. Dickinson families, students, alumni and faculty celebrated both sides of this coin during a Homecoming & Family Weekend that recalled and created shared memories but also offered a unique setting in which Dickinsonians could discuss a hot-button topic.

The discussions sprang from the launch of One College, One Community. The new program kicked off with a free community screening of Chasing Ice, an award-winning documentary chronicling photojournalist James Balog’s mission to produce visual evidence the earth’s changing ecosystem. (An accompanying photography exhibition, ICE: Portraits of Vanishing Glaciers, will remain on display in the Waidner-Spahr Library through Dec. 5.)

The recipient of the 2014 Sam Rose ’58 and Julie Walters Prize at Dickinson College for Global Environmental Activism, Balog and his team withstood dangerous conditions and overcame physical and technological challenges to capture images of evolving arctic landscapes. On Saturday evening, Dickinsonians had the opportunity to view the film together at the Carlisle Theatre and then share their responses.

Students, families, alumni and faculty also connected and reconnected at an all-campus picnic and in the stands, as the Red Devils football team took on Susquehanna University and the women’s soccer, volleyball and field hockey teams battled Haverford College, coming out on top in three of the four contests, including an incredible come-from-behind victory on the gridiron. They gathered in the Rector Science Complex Atrium to celebrate the Office of LGBTQ Services’ work and successes, and in the newly renovated Kline Center to honor 2014 Sports Hall of Fame inductees Alyssa Carlow Hilton ’04 (soccer), Greg Lott ’04 (track and field), Geoff Neese ’04 (baseball) and members of the 2004 men’s swim team.

Autumn was in the air as many toured the College Farm and then enjoyed live music, dance and fresh-pressed cider on its picturesque grounds. Some sampled handcrafted wares at downtown Carlisle’s Harvest of the Arts Festival, while others ventured to a nearby orchard to pick apples for a local food bank or learned about geologic and land-use history, courtesy of Joseph Priestley Professor of Natural Philosophy Marcus Key, during a hike to a Pole Steeple in nearby Pine Grove Furnace State Park. Additional highlights included art exhibitions and live performances, a planetarium show, a Trout Gallery tour and lectures about ancient history and antiquities, as well as the Asbell Center’s inaugural Stanley Ned Rosenbaum Judaic Studies Lecture.

On Sunday, Dickinsonians gathered to honor one of their own and to champion a common cause during the 10th-annual Run for Steph 5K run/2K walk. Held in memory of Stephanie Kreiner ’03, a student-athlete who was killed by a drunk driver just one year after graduating from Dickinson, the event raised awareness about the dangers of drunk and “buzzed” driving while raising funds for the McAndrews Fund for Athletics.