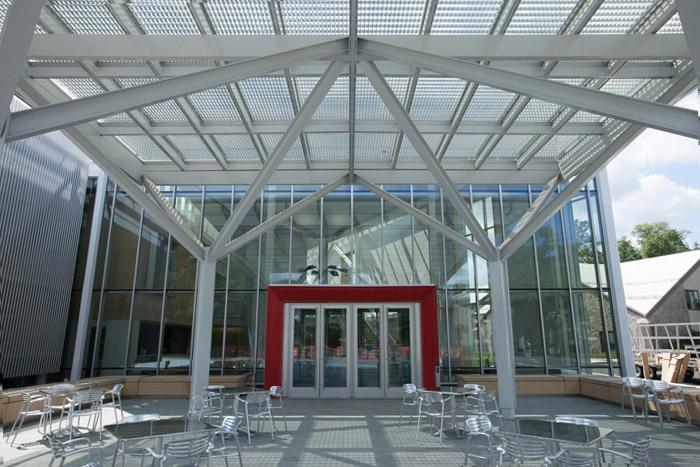 The main entrance to the Kline Center expansion lives at the end of the Dickinson Walk, linking many residence halls to the structure. Photo by Carl Socolow '77.

Student life, fitness and sustainability come together in the Kline Center expansion

There have been a number of enhancements to Dickinson's campus during the last few years, and one of the most notable is sitting at the corner of Cherry and High streets. Opening its doors Tuesday, Aug. 5, the Kline Center expansion is a sleek 29,251-square-foot structure that’s sure to become a destination for athletes and non-athletes alike.

Fit as a fiddle

The fitness upgrades should be enough to lure in everyone from the casual treadmill walker to the rabid gym rat. The new, larger fitness center features 70 cardio training machines, including 19 treadmills (nearly doubling the previous total), 18 selectorized single-station strength-training pieces, five power racks and a circuit training area, all of which combine to take fitness to the next level.

To warm up or cool down under the sun, there’s an outdoor stretching patio, which also provides a great place for tai chi, Pilates or yoga. Around the corner is a half-court basketball court, great for pickup games or working on your layups. Between the new structure and the Wellness Center, a tai chi garden provides an open, grassy area for stretching or relaxing. 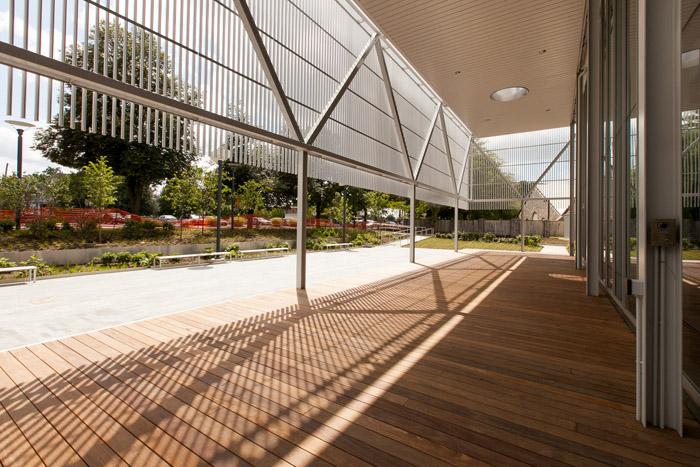 The outdoor stretching patio is a great spot to warm up or cool down while getting some fresh air. Photo by Carl Socolow '77.

“The way the building embraces the outdoors represents an often-overlooked aspect of sustainability,” says Ken Shultes '89, associate vice president of campus operations, “and we were very conscious of it during design. This is a fitness center, of course, but we wanted to add elements that would draw people outside.”

More than a sports hub

When you’ve worked up a sweat using an arc trainer or Smith machine, stop by the Juice Box, the Kline’s new healthy-options café. You can refuel and rehydrate on one of the many benches grouped throughout and outside the building—great spots to chat, study and people-watch.

All the new features will of course benefit Dickinson’s athletes as well, and as Les Poolman, director of athletics, explains, it could represent the dawn of a new era for the Red Devils. 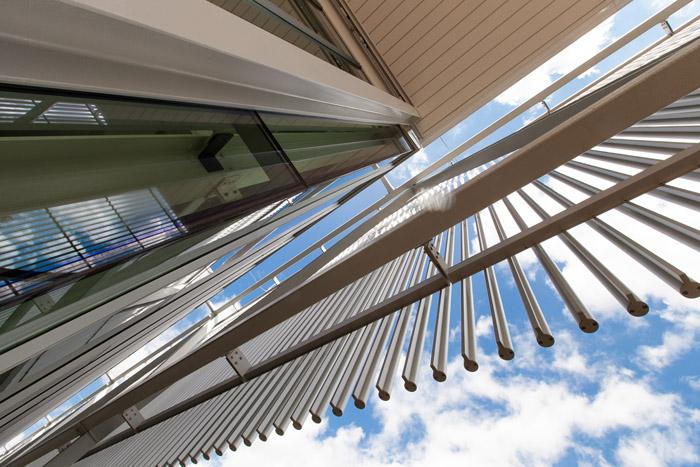 The perimeter screen is one of the Kline Center expansion's energy-saving features, as it greatly decreases the amount of direct sunlight on the building, thereby cutting down on heat gain. Photo by Carl Socolow '77.

“This new building will help with recruiting and permit our athletes to improve their strength and conditioning on state-of-the-art equipment,” he says. “And the five squash courts let us embark on a new intercollegiate era, being able to compete with a wide variety of new institutions outside of the Centennial Conference.”  Always a sports hub, the Kline can now serve as a campus hub as well, connecting the Dickinson Walk to the athletic complex and fields to the west and south.

“The plan has been to create a floor- and space-plan that responds to the needs of a variety of constituencies,” Poolman says. “And the overall expansion celebrates the building as a destination.”

The $14-million-dollar structure was built to draw members of the campus community from all corners, but many of the Kline's most interesting new features are things you might not even notice. Underneath the polished exterior lies a chassis built of what has been a prevailing ethos on campus for years—sustainable construction.

Let’s start with something that really might go unnoticed: water. 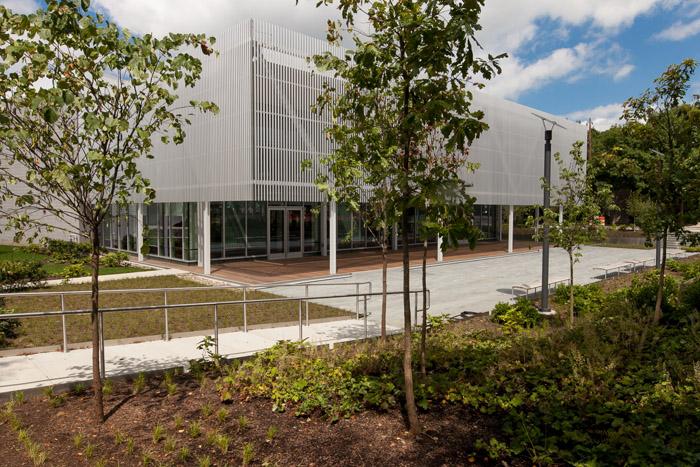 The new structure is surrounded by rain gardens and bioswales, areas designed to gather water for hydrophilic plants, thereby keeping excessive amounts of water from entering the storm-water system. Photo by Carl Socolow '77.

“This is one of the most effective storm-water management projects I've ever worked on,” says Director of Capital Projects, Planning and Construction Scott Noble, who notes that extra outdoor gathering space was created by moving the storm-water-collection pond underground.

“There was a tremendous amount of effort put into storm-water management,” says Shultes, who adds that the Kline expansion strives to be the fifth Leadership in Energy & Environmental Design (LEED) gold building on campus, with the Durden Athletic Training Center the sixth. “The Cherry-Louther intersection had a very poor storm-water-management system, so between this project and the greenhouse, we’ve solved a lot of problems for both Carlisle and Dickinson.”

The idea was to keep storm water from running ceaselessly into the sewer system, which takes rainwater into local creeks and eventually into the Chesapeake Bay. To accomplish this, rain gardens and bioswales are integral parts of the landscape, with curb-cuts diverting water from the street into these areas for water-loving plants to absorb.

"It’s straightforward and dramatic, and it has accomplished everything we wanted it to,” Nobel says of the design, which also integrates a perimeter screen to minimize direct sun into the building to reduce heat gain.

Putting the building to work

Inside, however, the building is flooded with indirect natural light, reaching just about every corner. Windows are everywhere, and a skylight running through the main corridor gets light all the way down to the first floor by creating light wells. Moreover, the curtain-wall design greatly reduces the amount of lighting needed, and most of the lights that are needed are energy-saving LEDs. 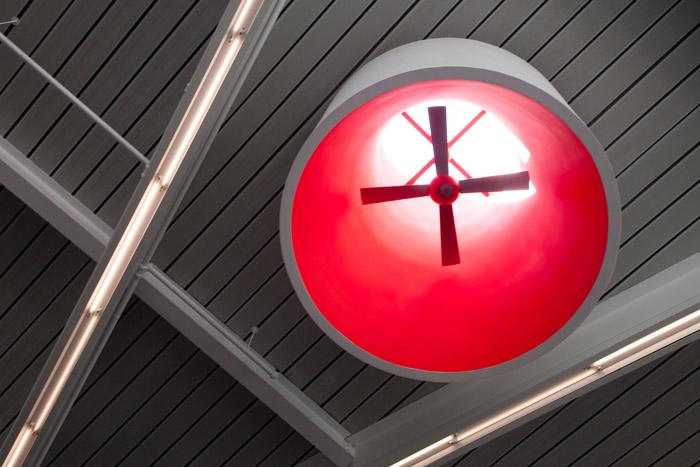 Strategically placed ceiling vents push or pull air in and out of the building, providing for natural ventilation, depending on the season. Photo by Carl Socolow '77.

“The building does a lot of the work that mechanical elements traditionally must handle,” Shultes says. Ceiling vents scattered throughout the fitness rooms open up, and reversible fans allow for natural ventilation in the spring and fall. Low windows along the perimeter allow for increased circulation, while a central chase, or channel, provides natural ventilation for the entire building, as the intake is on the floor level and the air flows up to the equipment upstairs.

"All these pieces taken together make the building more environmentally friendly," Shultes says. “And the architects did an amazing job of integrating these elements into the design.”