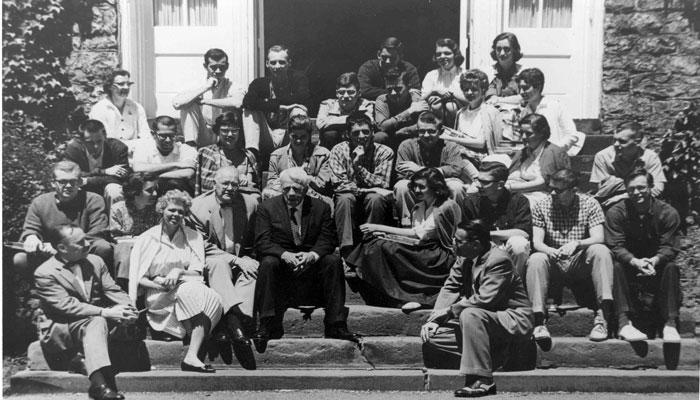 Robert Frost (center) poses on the steps of Old West with Dickinson students in 1959.

Jean Louise Stellfox ’60 was inspired to become an English teacher after meeting Robert Frost during the poet’s visit to Dickinson in 1959. When she died suddenly in 2003, Stellfox’s estate provided $1.5 million to the college to continue her mission of inspiring students through literature. Stellfox wished to honor her parents with her gift, so The Harold and Ethel L. Stellfox Visiting Scholars and Writers Program was created and continues to bring renowned literary figures to campus.

While in residency at Dickinson, the distinguished recipient visits classes, holds a seminar for aspiring writers, gives readings and presentations and shares meals with students and faculty. A monetary award accompanies the residency.

Read more about the previous recipients, and view photos from their visits to Dickinson:

"M. Butterfly Author to Present Lecture"
"The Icing Is Not the Cake"

“Who's Afraid of Edward Albee?”