Starting the Journey Together 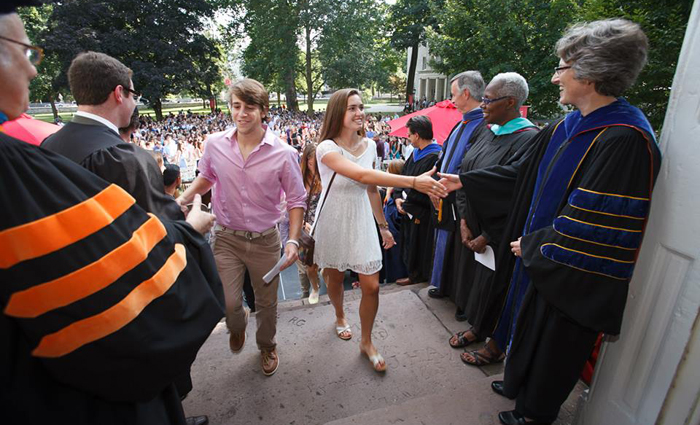 Neil Weissman (foreground, left), provost and dean, and President Nancy Roseman (foreground, right) welcome the first two members of the class of 2017 to ascend the steps of Old West. They will descend those steps in four years when they graduate.

President Nancy Roseman struck an exuberant tone as she welcomed 627 new students into the college community. “You and I are starting this journey together,” she told the members of the class of 2017. “I certainly hope you’re as excited as I am.”

The ceremony began with a procession to the John Dickinson campus and a welcome address by Stephanie Balmer, vice president for enrollment, marketing & communications and dean of admissions. “You come to us from huge cities and small towns around the world,” she told the new students, noting that their ranks include a Department of State scholarship-holder, an Appalachian Trail hiker, debate captains, scientific researchers, volunteers and several Rotary scholars. “This is a class that will inspire us and make us proud.”

Joyce Bylander, vice president for student development, announced this year’s Shuman Prize-winners, Jessica Klimoff ’16 and Jahmel Martin ’16, honored for superior academic performance and outstanding contributions to the college and community, while Professor of English Wendy Moffat recognized the induction of 17 rising seniors into Phi Beta Kappa. Each was ranked in the top 3 percent of their class.

Student Senate President Will Nelligan ’14 used his moment at the podium to encourage the first-years to make the most of their brief time on campus. “College will be a transformative experience, but you decide how, and how much,” he stressed. “Make every moment count.”

But of course, as Roseman noted in her first Convocation address, the students would have much help and guidance along the way. “Hundreds of people are working on your behalf, many behind the scenes,” she told the members of the class of 2017. “You inspire us to be our best selves, as we work to help you become your best selves.”

Roseman then struck the ceremonial bell to signal the start of the new academic year. The moment was marked by the singing of the alma mater, led by Holly Kelly ’15, a member of the College Choir. The new students then climbed the steps of Old West and signed the college register—a tradition that dates back to the college’s founding.

“It’s a nostalgic moment for us seniors, because it seems like we just climbed up those steps,” noted Morgan Tramontano ’14, who has attended every Convocation ceremony since her first year at Dickinson. “And in a couple of months, we’ll be coming down those steps [during Commencement].”

“It feels surreal to know that this is finally happening,” said a beaming Jillian Marini ’17, moments after signing her name. “It’s nerve-wracking, but also exciting, all at once.”

Robert Chase ’17, who came to campus a week early for football camp, was chomping at the bit to get started. “The campus was pretty empty that first week, so it feels great to see everyone here,” he said. “They set a high standard here. Now I want to live up to it. I’m ready.”