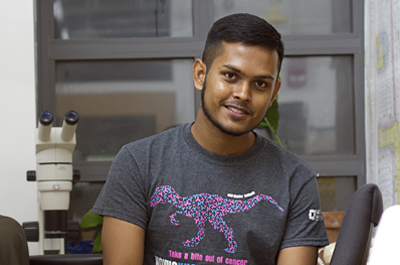 Rizwan Saffie '14 takes a break from his work as a 2013 summer intern at Princeton University's Kang Lab. He is currently applying to Ph.D. programs in molecular biology.

In less than four years on campus, Rizwan Saffie '14 has distinguished himself as an exceptional scholar, and he's poised to go on to do even greater things.

A native of Guyana who remembers performing backyard science experiments as a kid, Rizwan began to research the genetic reprogramming of leukemia cells as a sophomore, and the following year, he presented his work at the American Association for Cancer Research's annual meeting, a conference that drew over 18,000 cancer researchers from around the world. He also was among the 72 students selected nationally to participate in Princeton University's Summer Undergraduate Research Program in Molecular and Computational Biology, and a few months later, was named the top student in his class during the 2013 Convocation ceremony. Along the way, Rizwan honed his leadership skills through his work as a club officer, intern and resident advisor (RA).

Recently, he was accepted into the University of Pennsylvania's doctoral program in cell and molecular biology.

Photography Club (I joined in my freshman year and am now an executive member of the club), Center for Sustainability Education (I worked two years there as the greenhouse-gas-emissions inventory intern and media intern), Phi Beta Kappa, Alpha Lamba Delta, RA.

When, for the second year in a row, I ranked number one in Guyana for my performance in British A-level exams. I choose this accomplishment not because I am ecstatically proud of it but because it made my family and friends very proud. It was nice for both me and them to see all my hard work pay off.

In spring 2011 I took American Studies 101: Race, Gender, Sexuality and Power in the U.S. For the first time, I got to talk and learn about things in class that one would never dare talk about in a classroom back home. That introduction to the topic fueled my interest in social justice and politics.

I've always had great interest in finding out how things work. Growing up, I carried out my own little experiments in my backyard in rural Guyana. I was fascinated by science and the scientific method.

George R.R. Martin's A Song of Ice and Fire series (best known as the book behind the TV series Game of Thrones). Martin does a great job telling the intricate story of a dynastic war for control of a fantastic kingdom.

I have an obsession with the French language and independent French movies.

My parents, Munir and Basmattie. They have always tried their best to support me, even in the most difficult situations. They did not have much growing up, and I really admire their strength and their dedication to me and my siblings.

This is a tough one, but [Associate Professor of Biology] Michael Roberts definitely has shown great interest in seeing me—and all of his students—succeed. He is terrific at translating his vast knowledge into understandable lectures and explanations, and I learned a lot from him as a student in his class and as a research assistant in his lab. He also has offered very useful advice about the graduate-school application process. Like many of my peers, I consider him a friend.

Always be enthusiastic about learning and have an open mind. You will meet great people, do great things and learn so much about yourself and the world.

What Dickinson has given me:

I am thankful to Dickinson for countless experiences, but it’s the relationships I’m most thankful for. I am indebted to the many friends that I have made along the way—students, professors, friends from CSE—who come from all over the U.S. and around the world.

Racquetball courts in the Kline Center! I enjoy taking breaks to play (i.e., defeat) my friends in a match or two.

I love photography and cooking. (The fact that I can cook surprises most people.)

If I could have dinner with anyone (living or dead), it would be . . .

Walter Rodney, a Guyanese thinker and activist who had very interesting ideas about race and power in my country. I would love to have a conversation about these topics with him, because they play such an important role in the politics of my homeland. Sadly, he was assassinated at a young age and could not finish the amazing work he had started.

Why I chose Dickinson:

An advisor from high school suggested that I apply. After obsessively researching the school, I was won over by reports of the dedicated science faculty and the small size and warmth of the community. I applied for Early Decision, got in with a very generous financial-aid package and came to the U.S. for my very first time. It has been an amazing and enlightening journey.