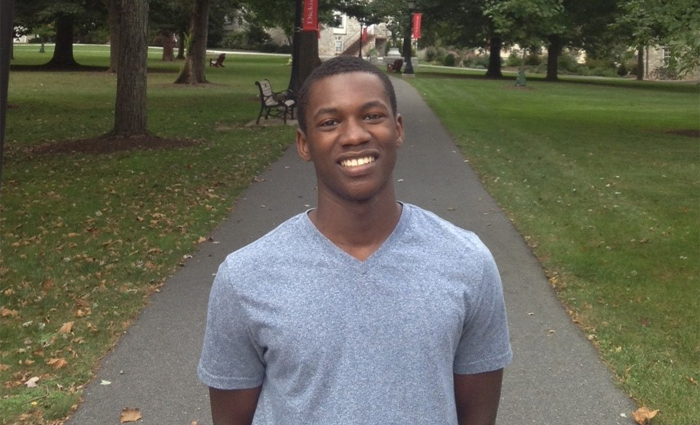 New York Posse scholar Jahmel Martin ’16 overcame formidable challenges both before and during his first year on campus, but his hard work, open-mindedness and resilience are already bringing rich rewards.

He dived head-first into his Dickinson experience, earning top academic honors and becoming involved in MANdatory, L.E.A.D. Mentorship, intramural basketball and WDCV 88.3 in his first year on campus. Those distinctions earned Martin the George and Mary Louise D’Olier Shuman Prize, bestowed annually on the rising-sophomore man and woman who demonstrate both superior academic performance and outstanding contributions to the extracurricular life of the college. He and Jessica Klimoff ’16 were awarded the Shuman Prize during the 2013 Convocation ceremony.

Jahmel was recently named one of just 42 recipients—out of a pool of approximately 700 top undergraduates and recent grads from 11 countries—of the 2015 Humanity in Action fellowship. This prestigious international award funds Jahmel's monthlong stay in Copenhagen, Denmark, where he'll work other social activists and scholars from around the world, who are interested in finding the political roots of discrimination and working to effect positive change at home and globally.

On deciding to attend Dickinson:

As a senior in high school, I reached the third round for the Posse scholarship, and I was able to accept or deny the offer. I was nervous and unsure about fitting in as an African-American. I couldn’t picture myself here. Then I sat in on the student panel during the Fall Open House and listened to the sophomores and juniors speak to their experiences. Robert Spriggs ’14 walked in late to fill the last open seat. His answer to one question made me join the class of 2016: “Moving from D.C. to Carlisle was hard for me, but I came here optimistic and with an open mind, [willing] to trying something new.”

Hopefully she doesn’t read this—embarrassing! I distinctly remember my first paper for Professor [Jerry] Philogene’s Workshop for Cultural Analysis. I did it the night before it was due. I received an e-mail the next day: “Hey Jahmel, would you come to my office during my office hours?” I had a bad feeling about that e-mail.

Instead of criticizing me and attacking me for my horrible performance on the paper, she told me that she has an vested interest in my success. For a whole hour, she helped me outline a new draft for a paper that was due to her the next day. She believed in my writing more than I did at the time, and I thank her for that from the bottom of my heart.

The Sacred Place by Daniel Black.

Daddy’s Little Girls, but I like all Tyler Perry movies.

During my first year at Dickinson, I had a lot of questions: Who am I? What do I want to major in? What am I going to do with my life? I went to hear [President William G.] Durden ['71] speak, and he said that a Dickinson education is a useful education. He also always addressed me as ‘scholar,’ even though I struggled to decide on a major or a career! That made me want to go forward, to excel.

The rapper J. Cole has had a huge influence on my life. He uses hip-hop as a platform to publicly challenge current hegemonic ideologies. He has taught me how to use my voice, empower others and be free to express myself through language, clothing and music. I don’t forget where I came from, but I aspire for more!