Published and Primed for Success 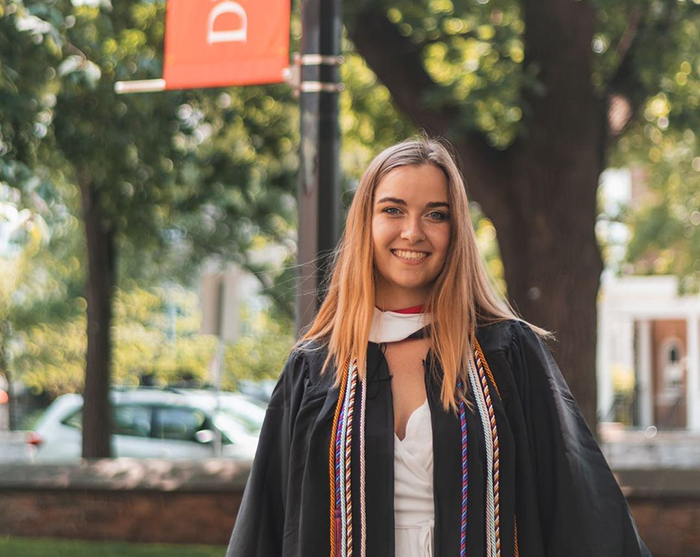 Claire Simpson '22 on the day she graduated from Dickinson.

Weeks after her Dickinson graduation, Claire Simpson ’22 celebrated a rare academic accomplishment when a chapter she’d cowritten as an undergrad was published in a book.

Simpson was a double major in international studies and quantitative economics at Dickinson who was involved through both majors’ committee. She also tutored English as a Second Language, played club soccer, and earned an international-studies department award and honors, as well as the C.W. Fink Memorial Economics Prize.

While close relationships with faculty deepened her academic experiences, it was Simpson’s involvement with Dickinson’s Mock Trial Team—and the opportunities it brought to intern at the Carlisle Courthouse over the summer—that strengthened her interest in the law.

Simpson had already decided to take the LSAT, the preparatory test for law school, when Alam proposed an economics-focused, international studies summer research project during spring of her junior year. Funded by a Dickinson research and development grant, the research project was a literature review of how impactful events such as earthquakes, tsunamis and war effect children’s education in developing countries.

Eager to do economics research—and test her budding decision to pursue law, rather than economics, as a profession—Simpson was in. Throughout summer of 2021, Simpson found, categorized and summarized existing articles on the subject and wrote the basic structure of the chapter. After her coauthors edited her work, she proofed the final version for publication, extending her work on the project into the fall semester of her senior year to complete the chapter.

“It was pretty shocking and humbling to be working side by side with such experienced and knowledgeable authors, but throughout the process they only ever treated me as an equal,” Simpson recalls.

“She was even able to take the lead with certain types of work within the project, which speaks well of her commitment and her abilities,” says Alam.

Now, Simpson is in her first year of law school at Duke University, and she’s gratified to see all of her hard work in tangible form. She notes that the research and writing skills she sharpened through this project have come in handy during her first research assignment, and she’s enjoying the rigors of law school so far. In her spare time, she coaches the Duke Mock Trial team.

Simpson’s early success comes as no surprise to her former professor, who notes that she began her postgrad career far ahead of the curve.

"It is considered prestigious when you write a peer-reviewed book chapter as a faculty, and it is almost unheard of to write such a book chapter as an undergraduate student in the disciples of international studies or economics,” says Alam. “Claire has managed to do just that, which makes it an extraordinary achievement. She is clearly going on to do great things.”