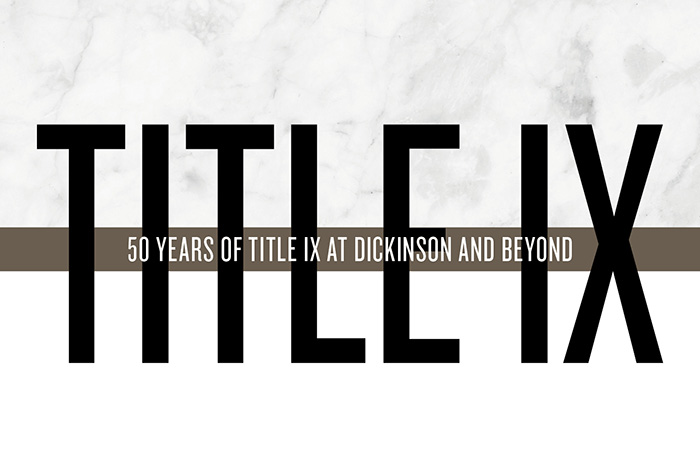 No person in the United States shall, on the basis of sex, be excluded from participation in, be denied the benefits of, or be subjected to discrimination under any education program or activity receiving Federal financial assistance. —Title IX clause of the federal Education Amendments

When Title IX passed in 1972, the second-wave feminist movement was in high gear across the U.S. Nationwide, activists at educational institutions organized events to raise awareness of, and protest issues related to, sexual harassment, access and assault, and new and expanded programs and departments worked to support and elevate women.

At Dickinson, the 1970s saw the arrival of the first class of women to join ROTC, the election of the first woman Student Senate president and the hire of an affirmativeaction officer. The Commission on the Status of Women began in 1972 and continued to study the needs of Dickinson women, with different names and iterations over the years.

The first-known survey of women students was conducted in spring 1972 by the Women’s Group, the college’s first-recorded second-wave student organization. The Advisory and Planning Committee for Women’s Programs, begun in 1973, sponsored campus events and published a newsletter. Led by students, faculty and staff, the Women’s Resource Center took over this work in 1976. Dickinson’s official director-led Women’s Center launched in 2008, the same year as the student-run Feminist Collective.

Also in the late 20th century, Dickinson students began to organize campus protests related to sexual assault, at a rate of roughly once per decade, and awareness-raising and outreach events were held annually. While Dickinson’s field hockey team (founded in 1957) and women’s tennis (1959) and basketball (1968) were already well established, women’s intercollegiate athletics teams grew rapidly across campus and across the nation after the passage of Title IX, with Dickinson’s women’s swim program debuting that same year. Volleyball and women’s lacrosse arrived in 1976, followed by women’s cross country (1980), softball (1981), track and field (1983), soccer (1984), indoor track and field (1984) and golf (2001). The most recent women’s team, squash, began in 2014.

In recent years, due in part to protests and challenges by students and alumni and also to sweeping societal change, the college formally examined its sexual assault policies and made important improvements.

After students occupied Old West for several days in 2011 in protest of sexual harassment and sexual assault incidents and responses, the college implemented new methods to inform the campus community of reported sexual misconduct and committed to regular updates to the campus community, among other measures. A dedicated college committee drafted a sexual misconduct policy and worked with faculty and students—including students involved in the protest—to ensure its implementation.

The sexual harassment and misconduct policy was again amended after a weeklong 2020 protest, including the use of gender-inclusive language. The college committed to completing all Title IX cases within 60 calendar days and to informing the complainant and respondent in writing should circumstances beyond the college’s control delay the process. Resources and support—and additional actions taken—were posted on the college’s website.

WHERE WE ARE NOW

Title IX work remains an integral part of Dickinson’s commitment to diversity, equity and inclusion on campus and beyond.

The Title IX & Sexual Respect Office is a resource for all students and helps educate the entire campus community.  It includes a full-time Title IX coordinator, Kat Matic, who was hired in 2018. An assistant Title IX coordinator is also now on staff, along with an investigator; the college also works with a pool of Title IX specialists who serve as investigators and hearing-panel members.

The work of the former Commission for Women is now a vital part of the mission of the Committee on Equity, Inclusivity & Belonging. Dickinson’s Women’s & Gender Resource Center continues to provide education, programming, mentorship and fellowship for female-identifying students and their allies.

After announcing in summer 2021 that the college was considering ending the men’s and women’s squash programs, Dickinson leadership reversed that decision in response to concerns voiced by Dickinson community members and further research into the program. The college has since hired a new squash coach and assistant coach, and a task force launched a study of gender equity and inclusion in Dickinson athletics. And Dickinson’s Hera Society, formed in 2016, provides peer-to-peer fellowship, mentoring and resource-sharing opportunities to women student-athletes.

“One of the things the Hera Society does really well is to provide a framework for mentorship opportunities with younger female athletes,” says Kim Masimore, senior woman administrator and head women’s lacrosse coach. “The Hera Society also includes educational programs on issues that our athletes, and our female athletes, encounter, such as stress management, body image, nutrition concerns and issues around media coverage of sports.”

During the past two years, Dickinson made available a second, informal process for students to make a sexual harassment and sexual assault complaint, in accordance with 2020 Department of Education guidance. Now, students may choose to pursue the formal legal process or may join together with the accused, along with a trained facilitator, to work toward a mutual resolution.

“This offers complainants the ability to interact with our staff, learn about the process and typical outcomes that are appropriate for their case and have a voice in how the process unfolds,” says Matic. “During the past two years, several complainants who chose this option have shared that they felt empowered by the process and they were delighted that we were able to resolve the matter within a few weeks.”

Dickinson’s Title IX & Sexual Respect Office works to educate Dickinsonians and respond to concerns on campus, and staff in a variety of departments and on several committees continue to develop programs that educate, galvanize and inspire, study the campus culture and advance this good work. These areas include the Women’s Center and Department of Women’s, Gender & Sexuality Studies, the EIB, the athletics department, the new presidential working group and the Office of Equity & Inclusivity.

And some Dickinsonians, like Lisa Santone Baker ’01, who’s owned the Carmen Fusco Pro Baseball and Softball Academy since 2017, create careers on the foundation that Title IX built. “[Title IX] defined my entire life,” says Baker, a record-holding NCAA softball player who played internationally and has coached recreational, tournament and high-school teams. “Now I can give back and mentor.”

But all Dickinson students, alumni, leaders, coaches, parents and friends also play vital roles in the ongoing work toward equity and inclusion at Dickinson and around the world. Title IX was the beginning, but the work continues, and it takes everyone.

“We know that if one member of our community is excluded from educational opportunities, we’re all harmed by that. That’s a core belief at Dickinson—we believe strongly in providing equitable opportunities for all of our students,” says Champion. “That’s why we’re excited about promoting Title IX at Dickinson. Rest assured, when we see great opportunities for growth in this arena, we’ll aggressively pursue them.”