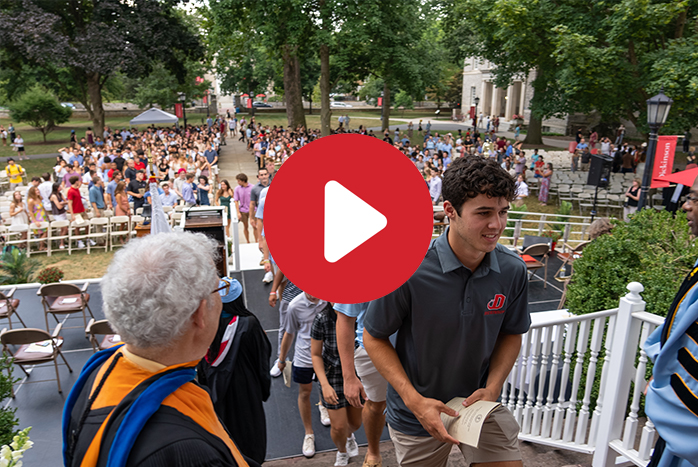 Class of 2026 signs in to Dickinson

The class of 2026 officially signed in to Dickinson during Convocation on Sunday, Aug. 28. The ceremony included words of welcome from Vice President for Enrollment Management & Dean of Admissions Catherine McDonald Davenport ’87, Student Senate President Chinemerem Nwanze ’23 and President John E. Jones III '77, P'11, who urged students to make the most of everything Dickinson offers.

“You have an unbelievable opportunity to stretch yourselves, to learn from each other, to challenge your assumptions, to see things from other points of view,” Jones said. “Whether it’s in the classroom or on the playing field or during late night conversations, you will not only gain incredible knowledge, but you will discover much about yourselves.”

In addition to celebrating new students, Convocation serves as an opportunity to recognize other members of the community for their efforts and service. A few of the awards presented include:

The newest members of Phi Beta Kappa also were recognized.

The Convocation ceremony marks the end of Orientation, during which first-year students attend First-Year Seminar classes, explore campus and community resources, engage in discussions surrounding ethics and inclusivity, and get to know one another.

The process of walking up Old West's stone steps to join the Dickinson community marks one half of a hallowed tradition at the college. The doors of Old West are only opened twice per year, once when the first-year class joins the college during Convocation, and then again when the graduating class walks down the stone steps to become alumni.