What Light Through Yonder Computer Breaks? 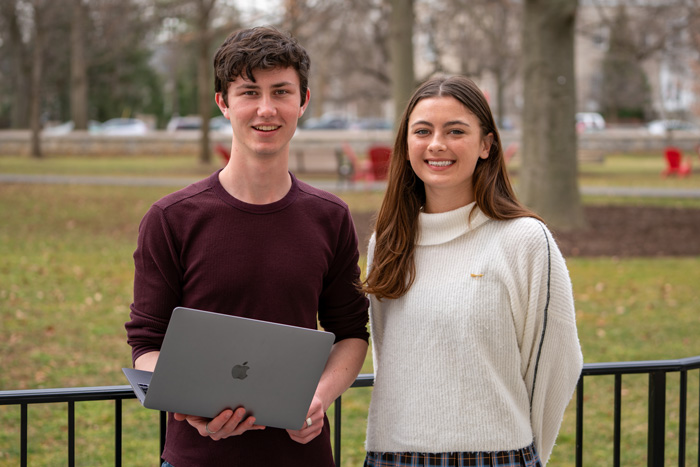 Ben Warren '25 (left) and Lucy Walrond '24 are among the students who used stylometric techniques to analyze literature last fall. Photo by Dan Loh.

Stylometry—the study of linguistic style—has been used to determine authorship of works as diverse as the Shakespearean canon, the writing of J.K. Rowling and tweets attributed to QAnon's Q. It's also used by Dickinson students, including those who recently teamed up use stylometric analysis to conduct cross-disciplinary research.

Some were enrolled in a literature course, English 322, taught by Assistant Professor of English Chelsea Skalak. Others were learning to code through an introductory computer-science course, taught across two sections this year by Michael Skalak, lecturer in computer science (who's married to Chelsea) and by Lev Fruchter, an adjunct faculty member in computer science. Working together, they applied techniques from both fields to their work.

That’s the beauty of the digital humanities, an emerging field that applies high-tech methods to answer questions arising from humanities research. And at Dickinson, students can get involved in digital humanities work and research, beginning in their very first year.

The idea for this project originated with the Skalaks, who recognized an opportunity for their classes to collaborate. They pitched the idea to Fruchter, who’d already developed the StoryCode digital-humanities program. Fruchter was all in.

In the past, the intro computer-science students analyzed the Federalist Papers for their final project. But last fall, they could choose, instead, to collaborate with the literature students. Twenty of the programming students stepped up to the plate. Those studying introductory literature selected a text and topic to research and developed research questions. The computer-science students used programming tools to analyze the text, and the others interpreted their findings.

Lamsal and Mishra joined forces with Warren to investigate The Passionate Pilgrim, a collection of 16th-century poems once believed to have been authored by William Shakespeare, through a project they titled “Whodunnit: The Passionate Pilgrim.” The three analyzed Shakespeare's canon as well as this collection to find similarities and dissimilarities. They also endeavored to identify other possible authors, such as Richard Barnfield, Bartholomew Griffin, Christopher Marlowe and Sir Walter Raleigh.

“With the methods we learned, we could ‘read’ hundreds or thousands of books and analyze them. The scope of that power is simply awesome,” says Warren. “Once our program led me to understand that Shakespeare was more likely to write longer sentences with shorter words, or that Marlowe used an unusual amount of punctuation, I began to recognize the patterns myself."

Berhe and Thorp teamed with Walrond to investigate how major life disruptions affected the poetry of John Keats. Using dictionaries to organize keywords and deploying a Python toolkit, Berhe and Thorp created a set of data to be used for calculating the noun-verb-adjective-adverb ratio in any piece of writing, says Thorp. They also used a dictionary to analyze the collected data.

Projects like these provide Walrond and her English literature classmates with an opportunity to develop research questions and partner with a small technical team to find the answers. And they develop useful skillsets for computer-science students too, as Thorp notes.

“I learned how to collaborate to reach the needs of the English department in a certain time frame and how to use what I’ve learned in class to find a solution for a problem that is not so representative of the normal lab or project format,” says Thorp. “It gave me an insight into what the future could hold as a programmer, when a client comes in needing specific information and a coworker and I have to present that client with that specific data."

Warren says he was thrilled to learn that he could have these kinds of experiences right out of the gate.

"I've always been interested in digital humanities, so having the opportunity to get involved with this as a first-year is really exciting," he says.