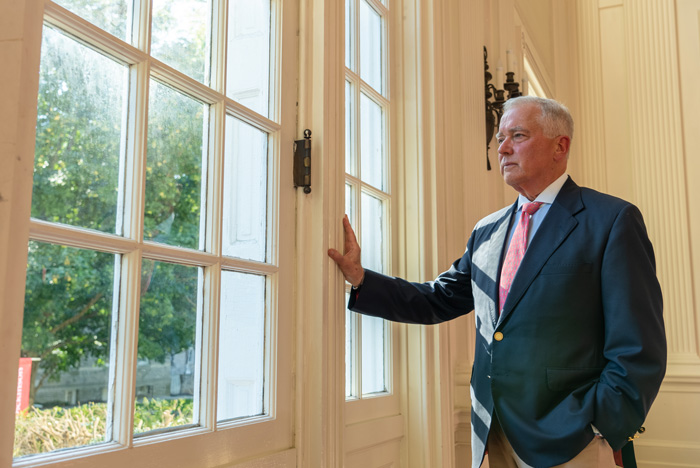 John E. Jones III '77, P'11, who retired from a lifetime appointment as chief judge of the U.S. Middle District of Pennsylvania in June 2021 to become interim president of Dickinson College has been named the 30th president in the college’s 239-year history, effective immediately. Dickinson’s Board of Trustees voted unanimously to make the appointment during a special meeting February 28. He is under a five-year contract.

“As we began discussions about commencing a national search for the next Dickinson president, it was quite clear to me and the board that we already had the right person for the job—an alumnus, a parent and previous board chair, who cared enough about Dickinson to resign from a lifetime judicial appointment to serve his alma mater at a critical time,” said Douglas J. Pauls '80 and chair of the Board of Trustees. “I am thrilled with this decision and convinced that John will continue to work with faculty, staff and students to build Dickinson’s revolutionary future. He is the right person to lead Dickinson at the right time. And, most importantly, he loves this college.”

In the seven months since being named interim president, Jones has worked tirelessly to advance the college. He established Dickinson Forward, a multifaceted initiative to position Dickinson to excel in the challenging times ahead. He also launched The Campaign for Scholarships: Change a Life—Change the World, the most ambitious financial-aid fundraising effort in the college’s history, which will fund Dickinson’s commitment to meeting the full demonstrated need of every admitted student.

“I am honored to be leading Dickinson and view this role as the opportunity of a lifetime,” said Jones. “I am passionate about our liberal-arts education and excited to work alongside our faculty, staff, students, parents and alumni as we take our beloved college to the next level.”

Jones previously served as U.S. district judge of the Middle District Court of Pennsylvania, a position to which he was appointed by President George W. Bush and unanimously confirmed by the United States Senate in 2002. Jones went on to become chief judge in 2020. He presided over a number of high-profile cases, including the landmark case of Kitzmiller v. Dover School District, after which he held that it was unconstitutional to teach intelligent design within a public school science curriculum. He also resolved the matter of Whitewood v. Wolf by striking down as unconstitutional Pennsylvania’s ban on same-sex marriage. Additionally, Jones co-chaired Pennsylvania Governor-elect Tom Ridge’s transition team and served as chair of the Pennsylvania Liquor Control Board.

He has received numerous accolades during his career. In 2006, Time magazine named him as one of its Time 100 most influential people in the world. He was the recipient of the first John Marshall Judicial Independence Award given by the Pennsylvania Bar Association. He also received the Geological Society of America’s President’s Medal and was inducted into the George Washington Spirit Society. An engaged alumnus and champion of the liberal arts, Jones was presented with an honorary doctorate in law and public policy from Dickinson College, which recognized him as one of the 25 most influential graduates in the college’s history. He also served as chair of Dickinson’s Board of Trustees.

Born and raised in Schuylkill County, Pennsylvania, Jones is a graduate of Mercersburg Academy, Dickinson College and Penn State Dickinson Law. He and his wife, Beth, have two children, Meghan and John '11, and three grandchildren.