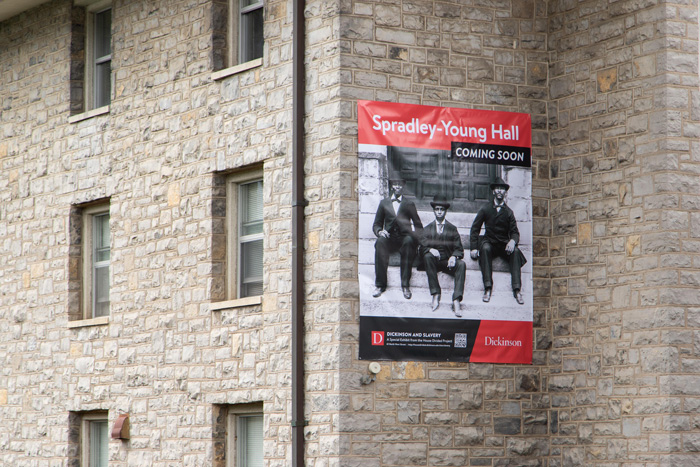 During a special ceremony, Dickinson will officially rename a residence hall and a campus gateway in honor of formerly enslaved people who were also longtime employees and friends of the college. Descendants of the structures’ new namesakes are expected to attend the ceremony, which will take place Saturday, Nov. 20, beginning at 10:30 a.m. outside Old West. In the event of inclement weather, the ceremony will take place in Weiss Center for the Arts.

Cooper Hall, currently named for Thomas Cooper, a noted scientist who taught briefly at the college but then became a leading pro-slavery idealogue in South Carolina, will be renamed Spradley-Young Hall. The change honors Henry Spradley and Robert Young, two formerly enslaved men and longtime college employees who helped integrate the Dickinson campus in the 19th century. East College Gate will be renamed Pinkney Gate, honoring both Carrie and Noah Pinkney, who were popular African American food sellers on campus for decades in the late 19th and early 20th centuries. Dozens of descendants of the facilities’ new namesakes and other 19th century Black Dickinson employees are expected to attend the special renaming ceremonies. They will be traveling from as far away as California, Kansas, Missouri, Nevada and South Carolina.

In May 2020, Dickinson’s Board of Trustees unanimously approved the name changes, following recommendations of a 2019 report, Dickinson & Slavery, a multiyear research initiative of the House Divided Project, which explored the college’s complex ties to slavery.

“This is an important step toward more accurately reflecting the history of the college and embracing the people who have contributed to it,” said interim President John E. Jones III ’77, P’11 . “This effort involved input from people across the campus and is a testament to the thoughtfulness of our students, faculty and staff and the leadership and vision of the House Divided Project.”

“When we started the Dickinson & Slavery initiative, we wanted to get the community talking about the college’s ties to both slavery and the anti-slavery movement,” said Professor of History Matthew Pinsker, director of the House Divided Project and lead researcher of the Dickinson & Slavery initiative. “In addition to publishing the report, we’ve opened a museum exhibit and created a self-guided campus walking tour to share this important history with our broader community.”

Moving forward, the college will explore other potential name changes for additional buildings with wide-ranging considerations related to recognizing more diverse historic contributions to the school and nation.

After the renaming ceremonies, the House Divided studio will be open from 1-4 p.m. to visitors who would like to see the full Dickinson & Slavery museum exhibit. In addition, during this time student interns will lead walking tours around the new Dickinson & Slavery wayside markers recently installed on campus.

In the evening, prize-winning military historian Eric Wittenberg '83 will deliver the second annual J. Howard Wert keynote address from the lectern that was on the speaker’s platform during Lincoln’s Gettysburg Address in November 1863. Wittenberg, who is the author of 22 critically acclaimed books on the Civil War, will speak at 7 p.m. in the Anita Tuvin Schlechter (ATS) Auditorium. In his speech, Wittenberg will explore enduring myths about the Battle of Gettysburg. The event is free and open to the public, with doors opening at 6 p.m. for those who would like to view the lectern and artifacts from the Gettysburg battlefield. A book signing will follow the conclusion of the lecture.