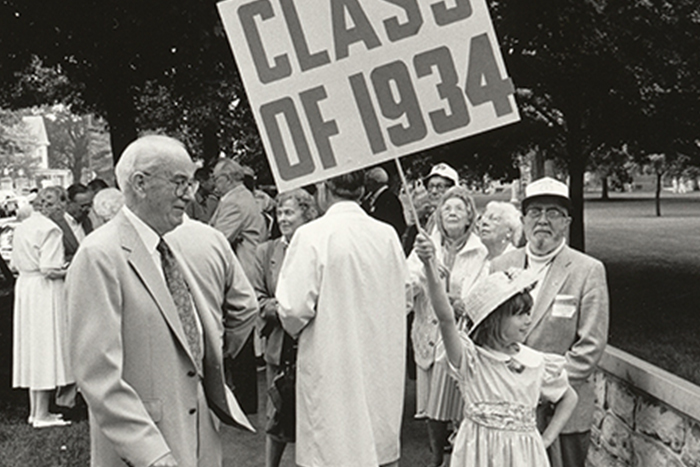 A look back at two centuries of fun

While 21st-century technologies provided the juice for Dickinson’s 2021 Virtual Alumni Week celebrations, it was the decades-old connections and traditions that made it hum. In honor of those time-honored ties, we’re taking a peek at the history of Alumni Weekend at Dickinson.

The story begins in 1828, when Dickinson organized its first “Alumni Day” as part of the college’s weeklong Commencement festivities. Alumni reunions remained a part of Commencement Week until Dickinson’s Alumni Weekend launched, under the direction of administrator Bruce Wall ’70, in 1982. The event has grown exponentially since.

The most popular Alumni Weekend event is one of the oldest—the Sunday brunch. The clambake was a favorite until 2007, when the college shifted to more sustainable, local foods, according to Errol Huffman, director of dining services, who includes College Farm fare in today’s menu. Another past favorite: the Alumni Parade (pictured above), which weaved through campus and downtown Carlisle in the late 1800s and early 20th century. It grew smaller over the decades and ended in 2007.

Newer traditions include the dance party—frequently featuring Dave Newell ’73’s alumni band, Bradley, already booked for 2022—and the Friday dinner on Morgan Field, College Farm lunch and athletics and affinity-group reunions. There are also open houses, tours of the campus and town, the Alumni and McAndrews Athletics Award ceremonies, Alumni College sessions and book signings, beer and wine tastings and a variety of receptions.

Alumni Weekend is also a traditional time to get updates from college leaders, dedicate class gifts and campus spaces and officially introduce new college leaders to the alumni community. Four presidents—including Dickinson’s first two women presidents— have marked their first official alumni appearances during Alumni Weekend since it began in 1982.

“I know a lot of small liberal-arts colleges hold Alumni Weekends, but I don’t know of any that generate the enthusiasm and loyalty of Dickinson alums. As soon as we leave each year, I start counting the days until we do it again.”

1982 First Alumni Weekend. Despite incessant rain and a few naysayers, it was a success, attracting rave reviews and nearly 600 alumni out of the gate.

2007 Mimosas added to the Sunday brunch to great acclaim.

2008 Unexpected downpour floods Carlisle streets, sending some cars floating and forcing all outdoor Alumni Weekend festivities inside. (We partied on.)