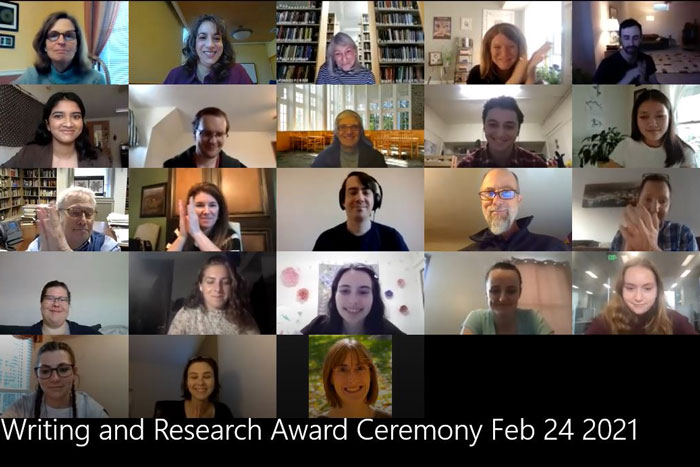 Recently, Dickinson awarded its annual First-Year Excellence in Writing Award, Waidner-Spahr Library Prize for Excellence in First-Year Research and Research Prize for Sophomores or Juniors. In remarks at the virtual ceremony, Provost and Dean of the College Neil Weissman—who taught a First-Year Seminar in its inaugural year, 1981—said that at Dickinson, writing is “about expression in deep and thoughtful ways” and that “research is about understanding a world that’s becoming more complex.”

And this year’s winners certainly embody those sentiments.

The First-Year Excellence in Writing Award

The First-Year Excellence in Writing Award recognizes a student or students who display mastery of the learning outcomes emerging from the First-Year Seminar (FYS). This year, two students were honored with the award: Max Abramson '24 and Prerana Patil '24. (You can read their winning papers here.)

Abramson’s paper, “Knuckles Bruised and Broken: Developing a Humanistic Philosophy in Dr. Who,” came in at 51 pages, in what’s been called the longest in the award’s 40-year history. Stemming from Assistant Professor of Religion Jodie Vann’s FYS “How to Be Human: Lessons From Science Fiction Literature and Film,” the paper set out to explore a fundamental question: what it means to be or not to be human—through the lens of the long-running sci-fi show.

“The show affected me not just as a fan but as a human, and it took less than 10 seconds for me to decide to write about Dr. Who,” said Abramson, who’s training to become a writing tutor in the Norman M. Eberly Writing Center. “Dr. Who is a show that presents the idea to its viewers that being human is defined by kindness and compassion that one can choose to embody.”

Patil, who’s headed for a chemistry and environmental science double major, won for “Pandering Celebrities, Loving Insults and Novel Veracity: An Analysis of Bo Burnham’s Make Happy.” Written for Associate Provost of Academic Affairs and Director of the Writing Program Noreen Lape’s FYS "Speaking to Power," "the scathing essay on celebrity worship" explored the comedian’s Netflix stand-up special, which satirized celebrity and social media and where the two intersect with society.

The Waidner-Spahr Library Prize for Excellence in First-Year Research recognizes a student who tackled an engaging question and produced an exceptional research project in any class in any discipline. This year, the prize went to Olivia Oligny-Leggett '24 for her paper, “The Impacts of Industrial Meat: Current Concerns and Future Potential for Change.”

Written for Professor of Biology Scott Boback’s FYS “The Evolution of a Cheeseburger,” the paper keys on how meat production leads to climate change and, more pointedly, the issue of why consumers don’t seem to be aware of it. The future biology major, who will pursue a health studies certificate, found that consumers aren’t aware of the climate effects of industrial meat production because of a concerted effort by meat producers to keep consumers in the dark.

“If consumers and corporations become aware of the problem and fight hard to reimagine the industry, there’s good reason to say that the state of the environment could and will improve,” Oligny-Leggett wrote, in what one award judge called “one of the most exhaustively researched works I have ever seen from a first-year student.”

Research Prize for Sophomores or Juniors

The Research Prize for Sophomores or Juniors is an annual award given to a student producing an exceptional research project. This year, Stephanie Uroda ’23 (neuroscience and chemistry, Quantitative Reasoning Center tutor) took home the prize for her research paper “BPA Reduces Anxiety Behavior in Female Mice.” The paper originated with a lab report Uroda wrote for Visiting Assistant Professor of Neuroscience Meredith Rauhut’s Perspectives in Neuroscience course. Of the recognition, Rauhut said Uroda “produced superior findings that demonstrated an ability to synthesis and integrate previous work.”

“I enjoyed working on the project because I‘ve been interested in anxiety, specifically how it relates to memory,” said Uroda, who notes in her paper that while BPA—a chemical found in many common household plastics—reduces anxiety in the subjects after short-term exposure, other studies indicate that long-term exposure has the opposite effect. “And I've realized how much I like working with animals as models for human behavior.”