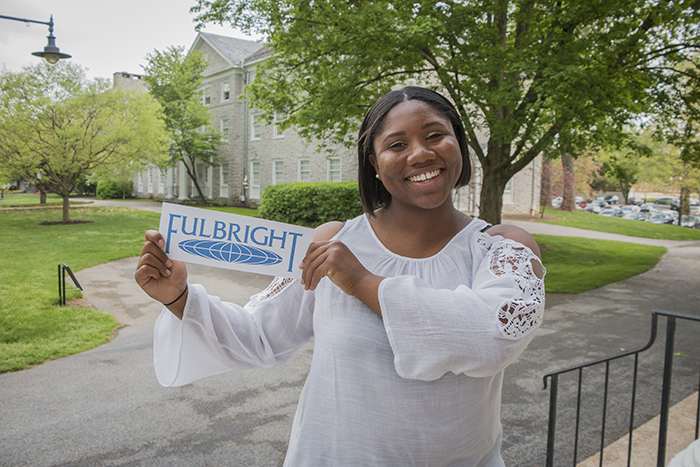 This 2018 video still captures Ashley Morefield '18 as she prepares for her 2018-19 Fulbright year. Now, she's earned a prestigious Pickering Fellowship.

Ashley Morefield ’18 dreamed of seeing the world, deep-diving into global cultures and promoting positive, meaningful change. Now, with a prestigious fellowship funded by the U.S. Department of State, she’s training to promote peace, global partnerships and related American interests as a member of the U.S. Diplomatic Corps.

Morefield is a recipient of a 2021 Thomas R. Pickering Foreign Affairs Fellowship, providing funds and training to prepare exceptional young Americans to work toward the promotion of human rights, prosperity, development and U.S. global values and interests as U.S. foreign-service officers.

“We are truly thrilled and excited that Ashley will be joining the Pickering Fellowship Program,” writes Lily Lopez-McGee, director of the Pickering Foreign Affairs program, in a press release distributed by the organization. “She demonstrated outstanding academic achievement, leadership and commitment to service during her time at Dickinson College. These experiences bode well for her success in the foreign service.”

Morefield has always loved travel and learning, and a Dickinson Center for Advising, Internships & Lifelong Career Development session helped her map out a rough path toward a foreign-service career.

Morefield’s double major in French & Francophone studies and international studies, with a concentration in sub-Saharan Africa, provided the skills, knowledge and context she’d need. A study-abroad year in Toulouse, France, deepened her understanding of European culture and geopolitics while sharpening her French-language skills. As a summer intern with STAND and The Borgen Project, Morefield crystalized her passion for community mobilization. And as a student-worker for Dickinson’s Popel Shaw Center for Race & Ethnicity, she learned how to effectively lead and advocate for positive social change.

Fresh from graduation, Morefield put her studies of sub-Saharan Africa to work as a Fulbright English Teaching Assistant in Yamoussoukro, Côte d'Ivoire. For a year, she taught English and American history at a secondary school and assisted at a U.S. Embassy-supervised bureau promoting educational programs. Two weeks after returning to the U.S., she began a new chapter, supporting programs in Guinea and Niger—and using her French-language skills daily—as part of the Central & West Africa team of the National Democratic Institute (NDI).

“Several Dickinson alumni work at NDI, and many expressed how much they loved working there and how much they had learned since they joined the organization,” says Morefield, now part of the organization’s Southern and East Africa team. “Through this work, not only have I developed my political analysis skills but I’ve also gained insight into such a specific subsector of international development, democracy and governance.”

Morefield had learned about the Pickering Fellowship during her sophomore year, when Kevin Doyle ’16 was announced as a recipient. On discovering that the Pickering program had committed to build a more diverse and inclusive foreign-service community in 2020, the time seemed right to apply.

Morefield will begin the graduate-school component of the Pickering fellowship this fall. After completing grad school, two internships and a mentorship, she’ll serve a minimum of five years of service and will have an opportunity to work as a foreign service officer in Washington, D.C., or at an embassy, consulate or diplomatic mission overseas.

“As a member of the U.S. Diplomatic Corps, I will be committing to a career of service, with tangible results of promoting peace, unity and understanding between the United States and other states around the world,” Morefield says. “I'm excited for a career that challenges me to expand my worldview and understanding of not only the U.S.'s interests, but also those of countries around the world.”