From the Grassroots Up 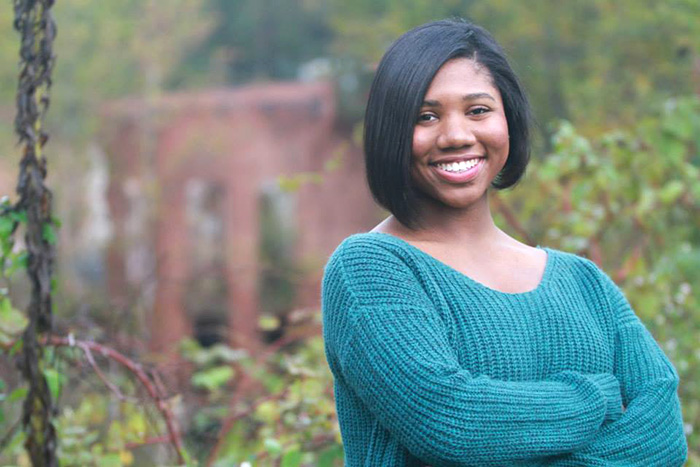 Ashley Morefield ’18 is curious about the world around her and excited to explore and understand it. She’s found an intellectual home as a double major in international studies and French & Francophone cultures. She’s also engaged in social justice, as a blogger for a student-led human-rights online publication, and as founder of the Dickinson branch of Books Not Bombs, an initiative to reserve space on college campuses for Syrian students. Ashley talks about her love of global cultures, her handsome and literary dinner-date ideal, her passion for social justice and more.

Pride and Prejudice by Jane Austen.

The summer before my senior year in high school, I took a class at American University called Conflict, Culture, and Cooperation. It really helped me decide that international relations was my destined career field. I love languages, traveling, diplomacy, conflict resolution, etc., so why not have a career that could include all of that? I didn’t think I’d major in French, but I’ve been studying it for eight years now and really want to become fluent, so I decided to double major on a whim.

I love the Biblio [Café] between 6 and 8 p.m. It’s always buzzing with people meeting for group projects or casually talking.

Chicken shawarma at the Kove!

I really enjoyed Anthropology for the 21st Century. Learning about the basic facets of culture, how societies form, various communities around the world and their kinship characteristics or language quirks was incredibly enlightening and helpful. I definitely wanted to do some field work afterward.

… a pediatrician, simply because, compared to my family and friends, I could handle seeing blood and not get disgusted. I also just wanted to help people, especially kids. Then I started taking biology classes, and I ruled out that career path.

[Assistant] Professor [of French Linda] Brindeau is one of my favorite professors of all time. She’s extremely committed to her students in all parts of their lives, not just their places in her classes. I actually feel like I have a friendship with her; I can talk to her about what’s bothering me or update her on my life. She genuinely wants to make Dickinson and the world an inclusive space. From aspects of the French educational system to protests on campus, we talk about a lot together.

I really want to make a difference in a community, whether it’s a small village in Rwanda or an agency of the United Nations. I’m also really passionate about human rights and gender equity. I really want to be on the grassroots level and build from the bottom up. Life-wise, I just want to experience the entire world for all of its complexities, beautiful cultures, fascinating languages and amazing people.

… Langston Hughes. Without a doubt. He was such a fantastic writer and advocate. Even years and years after his poems were written, they still resonate with me. I feel like I can see my experiences mirrored in his pieces. He was also incredibly handsome, which would be a plus for a dinner date.

It might be cliché, but my mom. She is incredibly strong, and I admire all that she has done in her life and for me. Single-handedly, she’s exposed me to so much. If it weren’t for her, I know I wouldn’t be where I am today because I wouldn’t have those values instilled in me. She taught me to fight for what I believe in, to have confidence in myself, to live without regret and to value an education.

I started the Dickinson branch of Books Not Bombs, a global initiative to reserve spaces in upcoming classes for Syrian students. It’s sponsored by a blog I write for, STAND, and other college-run organizations that support helping Syria. The campaign is helping the International Institute of Education, which created a Syria consortium, where 40 universities have already committed to bringing students. So the goal is to get Dickinson to join the consortium and see where we can go from there.