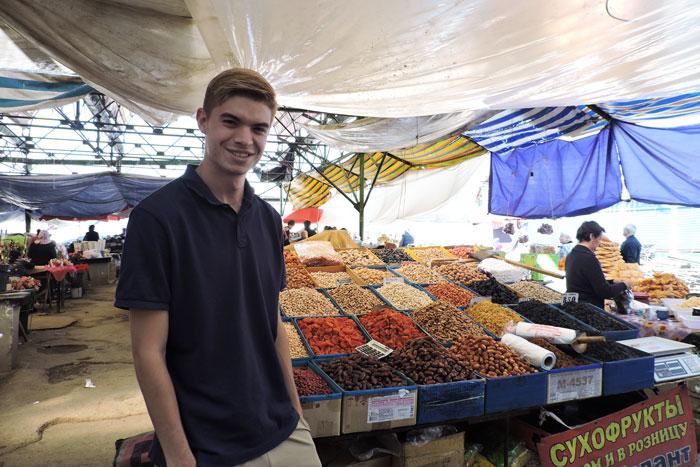 Kevin Doyle ’16 is headed for a life in the foreign service, and his path is as clear as a road on a map

Kevin Doyle '16 is serious about his career, about his plans to make his mark in the U.S. Department of State's Foreign Service. And the seed was planted where the tree will likely one day grow.

“I met my first foreign service officer (FSO) on my first trip to Russia and immediately fell in love with the idea of becoming a FSO,” Doyle says of a career that will take him around the world. “It seemed like a career tailor-made to my personality and interests.”

When Doyle was in high school, he participated in the state department’s National Security Language Initiative for Youth program, and he ended up in Russia at age 17, “with absolutely no knowledge of the Russian language.”

“Since then, I've become deeply interested in Russia and Russian culture,” says Doyle, who notes that his advisor, Assistant Professor of Russian Alyssa DeBlasio, and the Center for Global Study & Engagement helped him find his way. “There are so many problems in the world today that will only be solved with joint U.S.-Russian action, and that’s something that I find fascinating.”

For anyone trying to keep track of where Doyle’s interests have taken him recently, and what the near future holds, a bullet list might come in handy:

Doyle says he looks forward to interacting with a wide and varied swath of people and learning new languages (and deepening his understanding of the languages he already knows), all while operating on behalf of the U.S. government.

“I come from a family where almost everyone has served in the armed forces,” he says, “so I see this as my own way of giving my talents to America.”