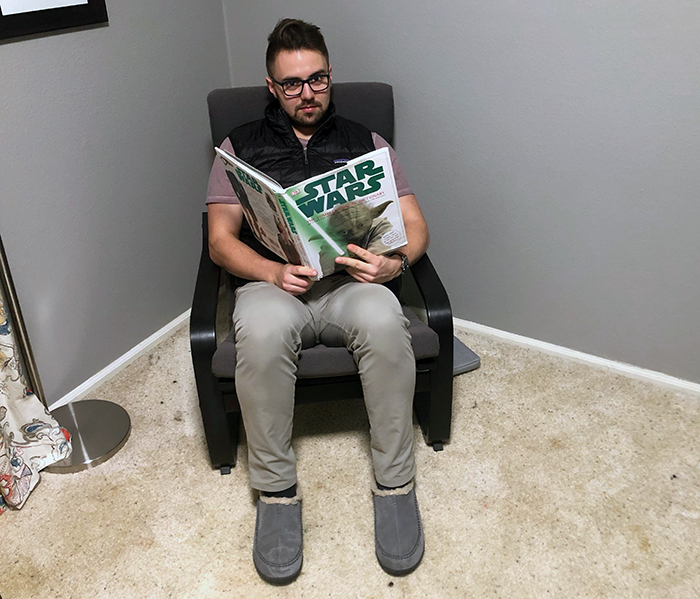 International studies and Russian, with a security studies certificate.

I attended a public international baccalaureate high school, where I focused on Japanese language studies and the importance of delving deeper into issues. The thing that attracted me to Dickinson was the same thing that attracted me to my high school—the small, tight-knit community where I could share my ideas and learn from others while also gaining the necessary skills to obtain a job in the public sector.

I love my international studies and Russian majors because of the challenges they bring. In Russian, we are a tight-knit group taking on a very difficult language. The daily grind of morning language has only made me more excited to take the courses in this department. In international studies, I have absolutely loved every professor that I have been able to take.

My favorite professor so far is [Visiting Assistant Professor of International Studies] Craig Nation. Professor Nation has advanced my interest in the study of international affairs and global politics, and he is one of my great inspirations for wanting to study international studies. Additionally, he has a wealth of knowledge on international-studies topics, and he can usually back them up with real-world anecdotes.

I can drive in almost any road condition or geographical location. Blizzard, heat wave, potholes, you name it. But I am absolutely terrified of having the light on in my car.

In my experience at Dickinson so far, the best part is the vast acceptance and friendliness of the community. Coming from the West Coast, I did not know what to expect of East Coast culture, and I found that it was not at all like I was told. I have enjoyed being able to “find my people” relatively quickly and having the opportunity to advocate for my fellow students in Student Senate and in other groups across campus.

Last year I was also given the opportunity to begin working at the College Farm, which was a great opportunity. It allowed me to fulfill my love of animals and also have college financial support. Another great thing about Dickinson has been the brothers of Delta Sigma Phi. They have helped me create a home away from home, and without their academic and personal support, I would not be where I am today.

I have gotten the opportunity to have various externships with Dickinson alumni and interesting summer jobs over the years, but by far the best one that I had was this past summer, when I got to continue my work with the U.S. Army War College in the strategic wargaming department. Through this internship, I helped create timelines based off of research and evidence and corresponded with my mentor, who was a high ranking military officer. With her guidance, I was able to help her team complete multiple war-scenario timelines and learned a lot about the Arctic in the process.

… a helicopter pilot. I had an obsession with helicopters, probably the fault of LEGO and action films. When I was 4, I added another goal: king of the West Coast.

After graduation I hope to pursue a Fulbright fellowship or join the Peace Corps. My eventual goal is to become a foreign service officer in the U.S. Department of State.