Dickinson’s Upsilon Delta Honored for Work in the Community 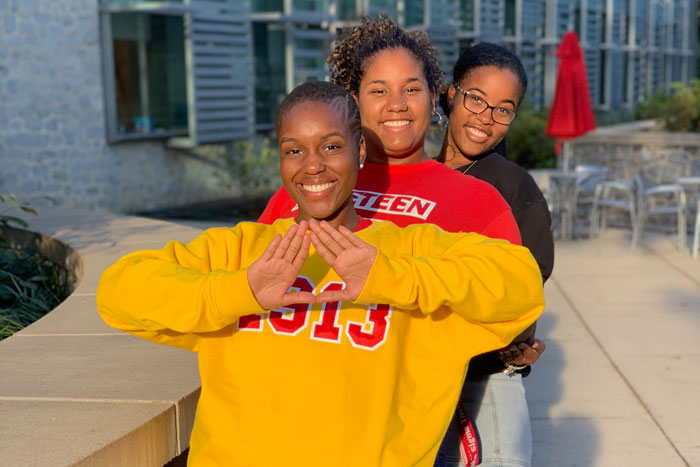 With only three members during the 2019-20 academic year, Dickinson’s Upsilon Delta Chapter of Delta Sigma Theta Sorority, Inc., might have had to work extra hard to make its mark. But that hard work paid off, as the chapter recently took runner-up for the Community Service Hours Award in the historic Eastern Region of the sorority.

“To be recognized by the Eastern Region is truly special,” says Kiara Smith ’21 (international business & management, Chinese), who represented the chapter at the region’s virtual conference, which hosted members from 10 states and Washington, D.C. “This accomplishment is extremely significant, especially as a small chapter. We are proud and hope to continue to do good work through programming, service, integrity and sisterhood.”

Members of Upsilon Delta, which was founded at Dickinson in 2007, volunteer with Carlisle’s Hope Station and as prison inmate tutors while also serving as campus tour guides, Presidential Fellows, admissions student interviewers and panelists, and first-year mentors.

“Upsilon Delta is special,” says Krystal Ramirez ’21 (Africana studies), the chapter’s current president, “and I’m proud that the campus can see intelligent, Black women who are leaders, mentors and friends to all at Dickinson.”

The chapter—whose third member this past year was Aisha Johnson ’20 (educational studies)—touches lives on campus through such events as Battle at the Burg, Love Your Body Week and DSTined for Greatness, and they make an impact across the county with volunteer work. And Smith says the sorority's mission doesn’t stop there.

“I’m happy that the chapter can make a difference in the lives of those they touch by actively changing the misconceptions often placed on them as Black women living in America,” she says, “and we hope that the chapter continues to grow with the Dickinson and Carlisle community for many years to come.”