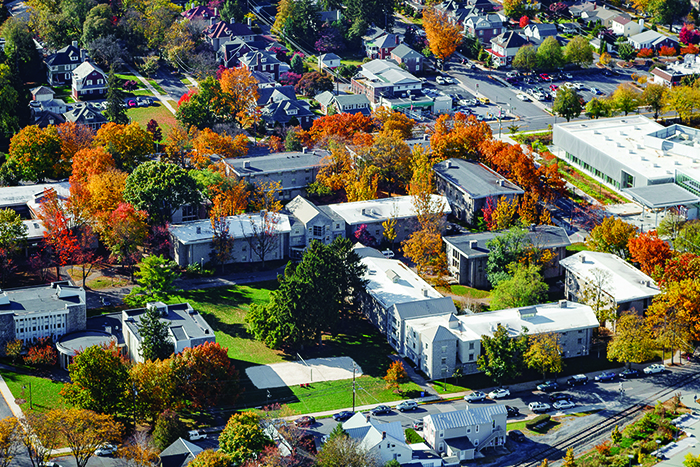 If you take a walk across campus, you’ll see several buildings named after figures from the college’s 237-year existence. But for a college with such a long history, one that has snaked through turbulent times, that tradition can become problematic decades—or centuries—down the road.

So when Matthew Pinsker, professor of history and director of the House Divided Project, and his students set out to explore the college’s complex relationship with slavery in their recent Dickinson and Slavery project, they discovered that echoes of that complex relationship live on today—in campus buildings named for slaveholders from Dickinson’s past.

“Many Dickinsonians have already heard some of the basic insights that our initiative has unearthed: that three of the college’s founders were slaveholders, as were roughly 60 percent of the founding Board of Trustees,” says Cooper Wingert ’20 (history), who has published nearly a dozen books on the American Civil War era. “How we choose to apply these new insights to our campus and community is a far more complex question.”

The overriding recommendations emerging from the House Divided report were to rename those buildings on campus whose names honor the legacy of supporters of slavery. The report ultimately singled out three slaveholders/proslavery figures who never renounced slaveholding—John Armstrong, Thomas Cooper and John Montgomery—and the halls on campus named for them (as well as the Montgomery Service Leaders program, which has been rebranded the Community Engagement Fellows).

Based on those recommendations, Student Senate began by passing a resolution calling for Cooper Hall to be renamed, and the science faculty removed Cooper’s portrait from the Rector Science Complex. The recommendations were sent to the President’s Commission on Inclusivity, and a larger committee comprising faculty, students, staff and alumni made final recommendations to the Board of Trustees and President Margee Ensign.

The board recently unanimously approved the recommendation to rename Cooper Hall to Spradley-Young Hall, honoring Henry Spradley and Robert Young, two formerly enslaved men and longtime college employees who helped integrate the Dickinson campus in the 19th century. During the 2020-21 academic year, a ceremony will be held to mark this change, with invitations sent to the descendants of both Henry and Mina Spradley and Robert and Matilda Young to participate.

“We’ve all heard the incantation ‘You can’t rewrite history,’ but that’s precisely what the historical craft, by its very nature, does,” says Wingert. “Crucially, however, that doesn’t mean obliterating slaveholders from the college’s historical landscape but rather recognizing that memorializations of them often covered up the lives of the enslaved people they held, and whose labor they—and the college itself—profited from.”

The board also unanimously approved the renaming of East College Gate as the Pinkney Family Gate, honoring both Carrie and Noah Pinkney, a couple who were popular African American food sellers on campus for decades in the late 19th and early 20th centuries. Descendants will also be invited to attend the renaming ceremony.

Going forward, the House Divided Project will develop content for explaining these name changes to be disseminated on the college website and through exterior wayside markers and interior lobby exhibit panels. Also, the president's office will further consider other potential name changes to the remaining nine residence halls known as "The Quads,” among them Armstrong Hall, and also to Montgomery House (current home to the Department of Theatre & Dance).

“Incorporating the voices of individuals so long neglected and overlooked is—in my view—a worthwhile reason to rewrite history,” says Wingert.