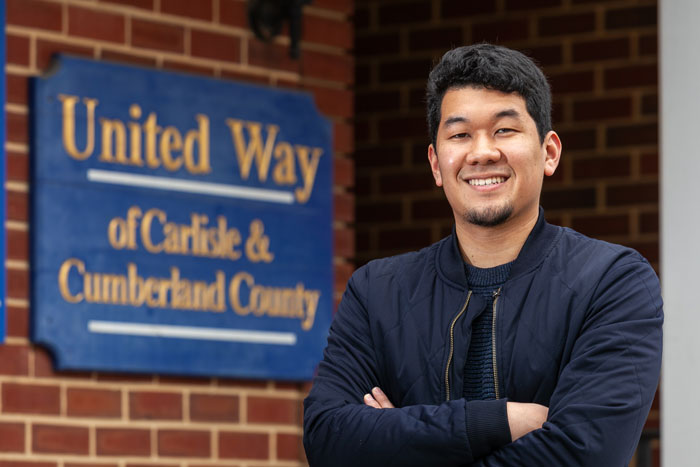 For Ken Bamba '20, making a difference in people's lives has become a way of life

As a Community Engagement Fellow, service trips coordinator, Posse scholar, student participant in CommServ’s Dreamcatchers program and MOB executive director, Ken Bamba ’20 (international business & management), who recently earned Dickinson's Community Engagement Award, has used much of his time at Dickinson to explore the meaning of community and civic engagement. In fact, three out of five of the above activities are housed under the Center for Civic Learning & Action (CCLA)—Dickinson’s center for developing ethical civic leaders who collaborate in the pursuit of just and resilient communities. Many of the center’s programs are led by students like Bamba, who find that what they give to community, community gives back to them.

As a first-generation college student and first-generation American, Bamba wasn’t always sure what to expect from college—but he found extraordinary direction and inspiration from those around him.

“Meeting upperclassmen and allowing them to give me advice and show me different opportunities, and saying yes to these opportunities, really influenced me and allowed me to find new passions,” says Bamba, who ended up contributing to and getting involved with many previously unfamiliar positions and organizations. In any capacity, Bamba is intentional about using his current roles and experience to empower and inspire more people to get involved in and to be advocates for civic engagement in communities that surround us. His work at CCLA gives him a platform to do precisely that, in an ethically informed, meaningful and collaborative manner.

“My service trip leader on my first service trip is the reason I became a Community Engagement Fellow, actually,” Bamba says, emphatically expressing his appreciation for the upperclassmen who have helped him get to where he is now. Without them, he says, he would not have known about or gotten involved with many of the programs he eventually got to not only participate in but also lead, come senior year. Today, he reflects on service trips as being some of the most meaningful experiences he’s had at Dickinson.

“Dickinson does service trips unlike a lot of other colleges,” he says. “Through relationships, the values we talk about, the reflection process, we encourage participants to really consider what it means to be part of a community. The why of why we do service trips is so big.”

Four years later, Bamba still keeps in touch with some of the people he met during his first service trip to Americus, Georgia, and, with Beth Eidam ’20, trains service trip leaders to take on the responsibility they all will bear.

Bringing Other People Up

Bamba has made a point of making sure other people are aware of and have access to these opportunities. His desire to advocate for service trips comes from the enormous satisfaction he has derived from the experience, the subsequent relationships, meaningful reflections and enrichment of cross-cultural communication skills.

“It’s so important to make sure you are continually trying to bring other people up,” he says, “and that’s a big part of me.”

Having gained so much personally, academically and professionally from these experiences, Bamba repeatedly emphasizes this assumption of responsibility to involve others in civic learning and action, a cornerstone of so much of what he has done at Dickinson.

“After spending a few months with Ken, I have learned so much about what it means to be respected by your peers and what it takes to step into your role as a leader,” says Caroline Eagleton ’23.

“In the way he speaks and acts, you can see his dedication to including people in whichever group he is a part of,” says Sher Bahadur ’22. And at CCLA, Bamba gets to collaborate with an interdependent team of staff, students and faculty, to inspire and involve more people in civic learning and action and occupy a multitude of positions of ethical civic leadership.

In the Community Engagement Fellows program, Bamba has found an established framework with which to marry his values, passions and academic experience—applying his classwork to his work with United Way of Carlisle & Cumberland County, the local organization he is paired with as part of the program. Over the past three years, he has focused on in-depth engagement, interaction and outreach with local neighborhoods to assist in annual campaigns and donation programs. By taking a class on nonprofit management while working with United Way, he has tied theory and praxis through first-hand engagement with the organization and conversations with board and staff members.

Through this student-civil society partnership at the heart of the Community Engagement Fellows program, Bamba participated in United Way’s community needs assessment, learning about Carlisle’s strengths, weaknesses, risks and needs. During his last year as a Community Engagement Fellow, he would like to utilize this improved civic understanding and local awareness, as he writes a grant proposal designed to address a number of these particular needs.

It is these kinds of partnerships, according to Bamba, that will gradually fill current gaps in the relationship between the greater Carlisle community and Dickinson. Continuing to engage with these communities—through CommServ, Community Engagement Fellows, or unique programs like the ongoing Carlisle mosaic (People, Place & Policy)—ensures a commitment to sustainable relationships. Collaboration translates into partnership, and partnership translates into relationship.

“Investing in these relationships is a really important part of what CCLA is doing,” Bamba says, “which I am so grateful for.”