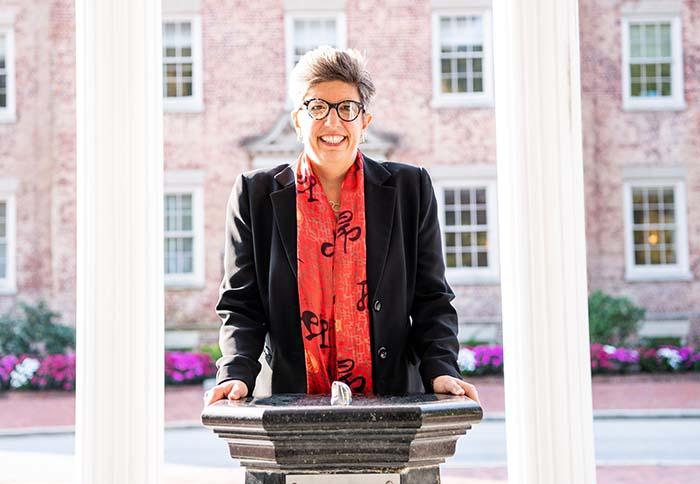 Former anthropology major Becci Menghini ’96 pursued a rewarding career in higher education. As the vice chancellor for Human Resources and Equal Opportunity and Compliance at the University of North Carolina-Chapel Hill, she supports 23,000 full- and part-time university employees while building community where all can thrive.

I still remember someone mentioning during convocation that 25% of the careers that my generation would hold didn’t yet exist or didn’t exist in the way they would function, and that the role of Dickinson was to teach us to be ready when they did. I really felt that the purpose of everything at Dickinson was to learn how to learn and to think about how that information or learning could be translated into my next experience. I didn’t just study pre-med and anthropology at Dickinson, I studied the world around me and tried to make what I was learning in the classroom make sense, both inside the limestone walls and outside.

When I struggled with a physics class, my professor worked with me to explain that the way the gurney fell out of the ambulance on which I was volunteering after hours was another way to think about what we were learning in the classroom. Likewise, when I participated in the American Mosaic semester, I was forced to describe the intersections between what I saw in Steelton, a community in economic ruin as a result of the closing of the steel mill, and the economic and sociological theories described in our books and lectures. To this day, I believe in making informed decisions based on theory and data, but I also work to find connections to other parts of my experience and to assess the parallels and the lessons that can help me better translate that theory and data.

I was a blue hat, and I loved the chance to meet and interact with women who were very different from me but who shared a love for Dickinson and deep connections to different organizations and programs.

I studied in Norwich, England as part of the Dickinson Science Program. I still view that year as one of the most significant in my lifetime. I did fieldwork in Ireland, I traveled to 23 different countries, I learned how to budget my money—and that if I ate more oatmeal and fewer meals at the campus bar, I had more money to explore new places. I learned a new way to study, met some of my dearest friends and discovered a love for adventure that follows me around still today.

I remember asking the then President A. Lee Fritchler to host a group of us for dinner at his home. It was pretty presumptuous of me, but he agreed, and our group spent the night sharing our experiences as students and making the case for some improvements on campus.

I try to stay connected, though admittedly, it is tough from afar, and my work keeps me mostly focused on my own institution. That said, I give back so that others might benefit from the same experience I had. When I went to Dickinson, I was just a kid from Wisconsin who showed up to a campus knowing no one. One of my roommates got a BMW for her high school graduation. I had gotten Lands’ End luggage with my initials monogrammed on it, and I thought that was cool. In the end, while no doubt my financial aid package was decidedly bigger than hers, we both had access to the same education, and I took advantage of every opportunity I could at Dickinson.

I’d only ever met one Jewish person before coming to Carlisle; there I heard firsthand from a Holocaust survivor. I joined ROTC and traveled with my squad to Florida one year to get my scuba certification. I volunteered on a local ambulance, served with the Best Buddies program and gave tours in the Admissions Office. I studied Asian religions and American studies, improved my Spanish, studied abroad and became a blue hat. I met my best friends, and I graduated believing I could do anything—so much so, I drove a hot dog after graduation—and got paid! Dickinson opened doors for me, in part because of the gifts of others, and I hope to be able to return the favor.

I love working in higher education and being part of growing the next generation of global citizens. My experience at Dickinson was key to my pursuing my master’s—and later my doctorate—in higher education management, and I feel lucky to be able to serve the Carolina community in this way. I get most excited by the experiences of our students, but I also take great joy in figuring out ways to support the people who allow students to thrive and excel.

I’m the vice chancellor for human resources and equal opportunity and compliance at University of North Carolina-Chapel Hill. My role is to help support the 23,000 full- and part-time permanent and temporary employees of the University so that they might have the tools and resources to do their work, and to help build a community where all can thrive. I work with a remarkable team of people and manage more projects and issues than I can count. On any given day, I play the role of cheerleader, firefighter (of the proverbial, not literal kind), coach, mentor, friend, confidant, Dr. Phil, strategist and circus elephant clean-up staff. And no two days are alike. It’s great fun—really! Well, most days!

Well, I drove the Oscar Mayer Wienermobile, and even brought it to campus and parked it in front of Old West. Since then, I’ve become decidedly less fun, but I have been known to show up to a meeting in an inflatable dinosaur costume!