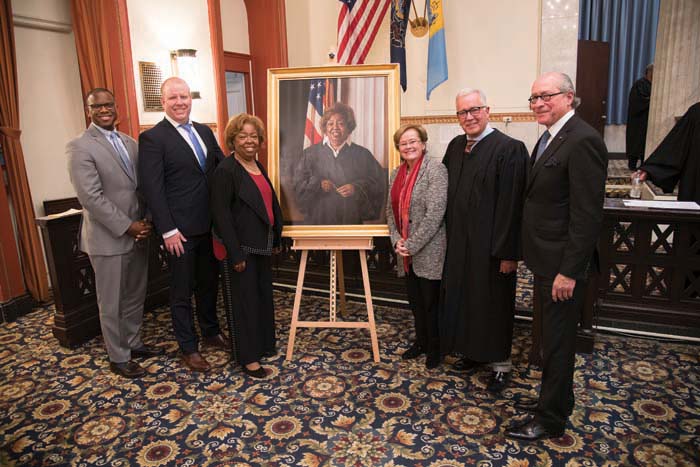 Judge Rosalyn Robinson ’68 has committed her life to service. Following her graduation from Dickinson with a degree in political science, she earned a J.D. from Boston College School of Law. She worked as assistant district attorney for the city of Philadelphia, chief counsel for the Pennsylvania Department of Aging and deputy general counsel for the Pennsylvania Office of the Governor. In 1997, she was elected judge on the Philadelphia County Court of Common Pleas. During her tenure she presided in the Domestic Relations Section of the Family Court Division, Criminal Trial Division and the Civil Trial Division.

Robinson has also been a committed volunteer and donor for Dickinson throughout her career. In addition to serving as a reunion committee and Dickinson Fund chair, she has been a member of the Board of Trustees (she is currently an emerita trustee). To pay back the scholarships that enabled her to receive a Dickinson education, she has consistently supported scholarships at the college, and in 2000 she endowed the Rosalyn K. Robinson Scholarship. And in 2018, she established the Rosalyn K. Robinson ’68 Fund for the Popel Shaw Center for Race & Ethnicity, which supports projects that provide individuals with opportunities to broaden their views and enrich their cultural experiences.

“The donors who contributed to the college more than 50 years ago enabled my dreams not to be deferred. In fact, they enabled my dreams to be realized beyond my greatest expectations,” Robinson said. “Dickinson opened my horizons through the personal attention given by so many professors. The one-on-one conversations with faculty, the dinners at their homes and the leadership opportunities I had fully prepared me to compete with my fellow employees at every level.”

On Nov. 14, family members, colleagues and Dickinsonians joined Robinson for her ceremonial portrait unveiling following her retirement from the bench in 2019. The portrait now hangs in Philadelphia City Hall. Several of Robinson’s colleagues on the Court of Common Pleas, including President Judge Idee Fox, sat en banc for the purposes of the ceremony and invited U.S. Middle District Judge John E. Jones III ’77, P’11 to join them.

“Judge Robinson’s life is the very epitome of what a Dickinson  liberal-arts education is all about—her life is a testimony to [Benjamin Rush’s] vision,” said Dickinson President Margee Ensign during the ceremony.