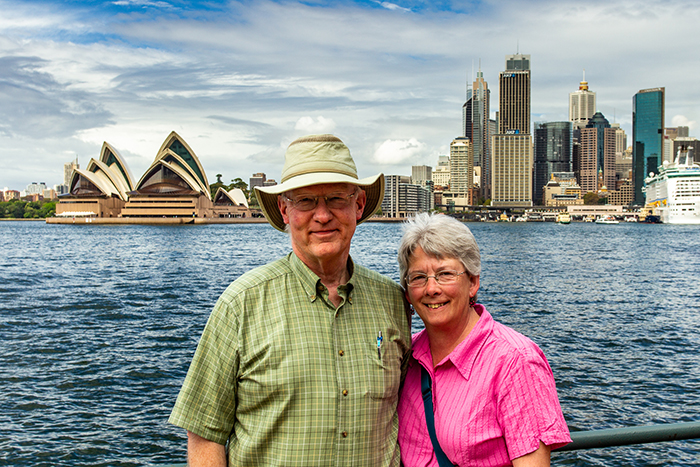 Computer-science education has changed considerably since Dave ’74 and Sue Stebbins Souerwine ’75 were undergrads. Back then, powerful computers were room-sized, and “big data” was not in the lexicon. The PC had not yet entered the market, and smartphones—as well as the internet, as we now know it—were still decades away. And for Dickinson students, a math major—with its emphasis on theoretical math—was the best road to a computer-related career.

Oh, how times have changed. After seeing seismic shifts in their industry and in communications culture at large, the Souerwines are helping to ensure that today’s Dickinson students are well-positioned to meet new opportunities and challenges in a rapidly evolving field.

As undergrads, Dave and Sue shared a math major and a lively sense of humor; they also were both involved in Greek life. But somehow, their paths never crossed until Dave’s senior year, when they both enrolled in an applied-math class. Instantly smitten, Dave asked Sue out. He had to ask several more times before Sue agreed to go with him on a hike. “My friends told me not to go out with him because he was a Phi Delt—they were convinced he’d leave me out there on the rocks,” Sue jokes, as she and Dave laugh, “but I returned safe and sound. And we started to date.” 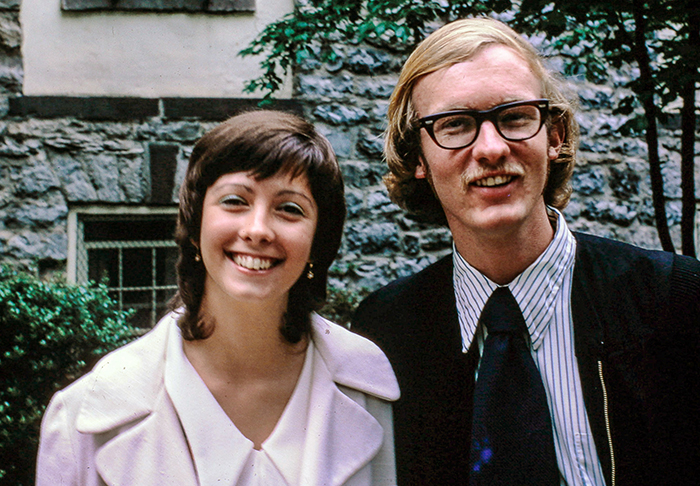 Sue and Dave Souerwine in 1974, on Dave's graduation day.

Dave graduated early and launched his career at Bausch & Lomb, working full time as he earned an MBA at the University of Rochester. For four decades, he worked in the medical-device and medical-technology sectors, moving into management in 1987. At the time of his retirement in 2012, Dave was president of McKesson Provider Technologies, a leader in health care IT.

Sue also graduated from Dickinson early so she and Dave could be together sooner. She worked in computer systems at Eastman Kodak for a decade before staying at home to raise their three sons. Each was born 3.5 years apart (“A finite series!” Dave quips).

Now, the Souerwines’ children are grown, and Dave is retired. They’ve traveled to 66 countries, 49 states and all of the Canadian provinces so far. The Souerwines attend reunions at their alma mater, and they give back as members of the John Dickinson, Mermaid and Old West societies. The couple also supports the college’s Quantitative Reasoning (QR) Center and recently established the Souerwine Fund for Quantitative Reasoning and Data Analytics with the goal of making quantitative reasoning, a subset of data analytics, a permanent Dickinson offering.

Last year, Dave and Sue teamed with several Dickinson professors to develop a data-science Revolutionary Challenge proposal, which is one of the finalists in this high-level idea competition for using the Dickinson education to address contemporary and future problems. Dave also volunteers to speak with students interested in STEM careers.

“We’re focused on helping Dickinson students to be actively engaged with the wider world and challenged to think differently,” Dave says, “and our hypothesis is that there's no better capability they could possess to help them accomplish that than knowing how to interpret, present and perform data analytics.That’s why we’re giving back in this way.”

Their influence is already felt on campus, says Emily Marshall, assistant professor of economics, who co-directs the QR Center along with Noreen Lape, associate provost of academic affairs and director of the Writing Program/Norman M. Eberly Multilingual Writing Center.

“The gift from the Souerwines has allowed us to expand our programming across the board. This means we can do more with peer tutoring, experience growth of the program and explore faculty development opportunities," Marshall says. "All of this enables faculty to engage with more challenging quantitative content in the classroom by providing support to students in gateway quantitative courses and elevating students already interested in quantitative concepts.”