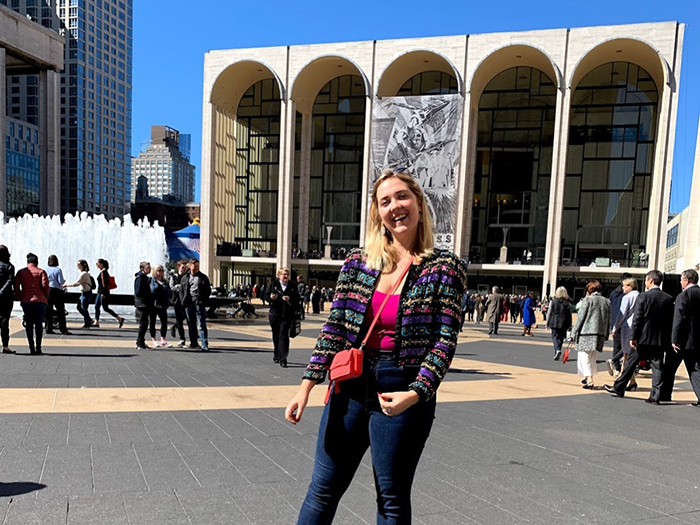 “I decided on Dickinson because I want to be a more well-rounded and educated person while also learning from an incredible music department,” says singer Hannah Youmans ’22, winner of the Concerto Competition and recipient of the Emil R. and Tamar Weiss Prize in the Creative Arts and the Metropolitan Opera National Council Auditions Encouragement Award. Learn why she chose to join Dickinson’s music department, where she spent the summer after her high school graduation, the Instagram account that most fascinates her and more.

A Room with a View by E.M. Forster.

I have been extremely dedicated to my training as an opera singer since high school, but I realized that having a laser focus on one thing means that you miss out on other types of learning. I decided on Dickinson because I want to be a more well-rounded and educated person while also learning from an incredible music department.

I’m so grateful for all the experiences I’ve had, thanks to Assistant Professor of Music James Martin and the voice department. I’ve gotten to sing in master classes for well-known professionals in my field, I’ll perform in an opera this semester—Humperdinck’s Hansel and Gretel, in Rubendall Recital Hall on February 14 and 16—and I’m a part of Dickinson’s beautiful musical community. I wouldn’t have had the courage to participate in the Concerto Competition and the Met Auditions, not to mention had the tools to succeed, without all that I learned from Professor Martin.

Besides Professor Martin, another favorite of mine is Associate Professor of Music Amy Wlodarski, who teaches music history and directs the College Choir. It is clear from her teaching and rehearsal technique that empathy and thoughtfulness are central to everything she does. Every choral work we perform has some larger purpose behind it. Each and every rehearsal teaches us what it means not only to make art but to be a better human being. This has made choir on Tuesdays and Thursdays my favorite times of the week.

During my freshman year I didn’t know which language I wanted to take, and my sister suggested Italian because she knew Visiting International Scholar Dee Dragani from when they both took classes at Dickinson. I learned so much Italian so quickly in that class because it was a comfortable environment where mistakes were looked at as learning opportunities. That’s what made me want to be an Italian major as well as a music major.

I don’t know if there’s anything I love more than traveling by myself to new places. I lived in Vienna for two months after high school and Russia for a month this past summer. I’m so grateful for my opportunities to travel and learn from different cultures.

… Cher. I love her music, her personality and her style, but I would especially want to ask her about the meaning of her eccentric Instagram posts.

One of my favorite songs is Eden Ahbez‘s “Nature Boy.” It was recorded originally by Nat King Cole, but I especially like the Michael Stipe version. I think the lyrics of the chorus answer this question best: “The greatest thing you’ll ever learn is just to love and be loved in return.”