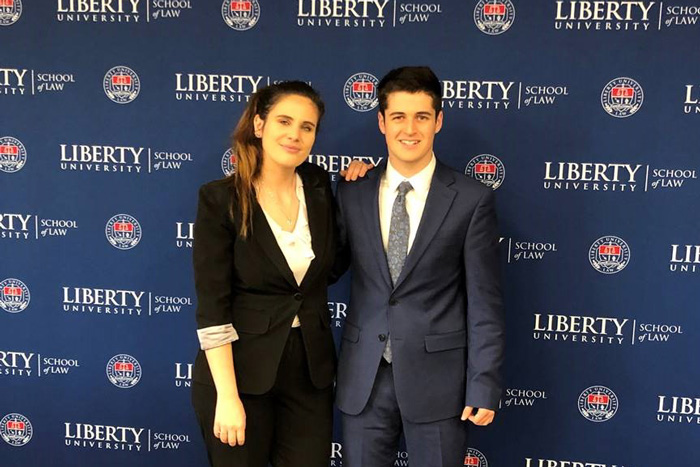 While mock trial simulates what happens at a trial, moot court simulates what happens at the appellate court level—which is where a case goes if a party unhappy with the trial results requests that the next-level court review the decision. The competition consists of two-person teams, which argue the merits of the case before a panel of three judges. The advocates with the best mastery of the facts and case law, and who most eloquently handle the sometimes rapid-fire questions from the bench, advance out of various regional tournaments to the national rounds.

Coached by Kendall Isaac, Dickinson’s general counsel, Lavine and Goldman represented a "client" in a contentious case that dealt with the sensitive topic of human trafficking and alleged 4th amendment (right to be free from warrantless search) and 6th amendment (right to confront your accusers) violations. Impressed with the skill of Dickinson’s team, judges noted that Lavine had a “good knowledge of the law and was well-versed on the facts” and Goldman had a “good demeanor and knowledge and handled questions brilliantly.”

Unfortunately, the team ran up against stiff competition in the three preliminary rounds. Two of the teams they faced were among the five teams to receive an automatic bid to the national rounds, while the third team they faced finished in the top eight and received an at-large bid to the national rounds as well.  As a team, Dickinson scored well, and their preliminary round points ranked them as the 16th best team out of the 32 competitors. Individually, Goldman was the 17th best preliminary-round advocate out of 64 total competitors.