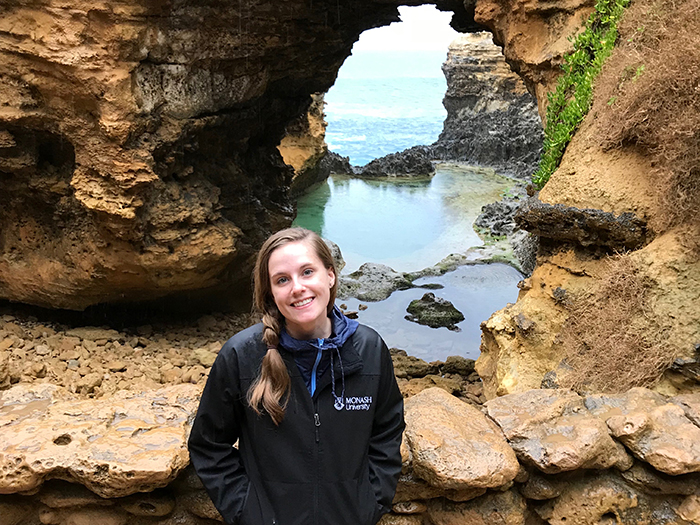 “I'm especially grateful to have been able to gaze at stars I had never seen before,” says Amanda Baylor '20 (physics & astronomy), who's always loved looking up at the night sky. “The Southern Hemisphere sky is extraordinarily captivating.” Baylor explains how her lifelong fascination with astronomy led her to conduct gravitational wave data research in Melbourne, Australia, through a Research Experience for Undergraduates (REU) funded by the National Science Foundation. She also discusses her student-faculty research trip to Flagstaff, Arizona, and the pride she takes in Dickinson's physics & astronomy department.

The Picture of Dorian Gray by Oscar Wilde.

What stands out about my Dickinson experience:

The Department of Physics & Astronomy is like one big family. The professors genuinely care about you and your success, and they are some of the most interesting people I’ve ever met. The physics & astronomy majors enjoy hanging out together, and we all work together on problems. This department is extremely supportive, engaging and just fun overall.

I fell in love with physics my senior year of high school because it allowed me to figure out how the universe worked. I always had an interest in astronomy prior to that. Every time I looked up at the night sky I was captured by its magnificence. I wondered what was there, and I longed to understand it. When I did a custom tour of Dickinson, I got to see the telescope and sit in on one of the astronomy classes taught by Professor of Physics & Astronomy Robert Boyle. After that, I knew I would fit right in to the major.

Observational Techniques, a special-topic ASTR 306 course, was a fantastic learning experience. It was very interactive, rather than being a lecture-based course. Associate Professor of Physics & Astronomy Catrina Hamilton-Drager guided us through the process of operating the telescope at Dickinson, taking our own data, analyzing it and interpreting our results. Additionally, we got to take a trip to Flagstaff, Arizona, to observe astronomical objects, which we got to choose ourselves.

About my summer research:

This summer I researched gravitational wave physics through an REU program at the University of Florida, supported by the National Science Foundation. This wasn’t a typical REU, however, because they sent the student participants all over the world for their projects. I was at Monash University in Melbourne, Australia, building a model to speed up the analysis of gravitational wave data, since current analysis methods take excessive computational time. We used the model to extract astrophysical information about merging binary neutron star systems and applied it to a recent gravitational wave detection. This helped us learn about the densest objects in the universe, and that information can be used to speed up future analyses.

Not only was this an incredible research experience, but it was also my first time traveling outside of the United States. Going all the way to Australia was an important challenge for my individual growth and exposure to different cultures. I got to explore Melbourne and some of the surrounding rainforests, see remarkable Australian wildlife and even take an adventure down the Great Ocean Road. I am especially grateful to have been able to gaze at stars I had never seen before. The Southern Hemisphere sky is extraordinarily captivating.

About my on-campus research:

Currently, I'm working on a senior honors thesis project with Professor Hamilton-Drager, analyzing spectroscopic data from the binary system KH 15D. KH 15D is a mysterious system, consisting of two stars in a binary orbit, which is also surrounded by a thick disk of gas and dust. Although it has been observed for decades, KH 15D continues to surprise us. The second star in the system has its light almost constantly obscured by the disk, so we are using KH 15D’s historical emission spectrum to prove the star’s presence and hopefully answer some of the questions surrounding the dynamics of the system.

In the summer of 2018, through a Dickinson student-faculty research grant, I performed research with Professor Hamilton-Drager on 10 eclipsing binary star systems. We looked at how their brightness varied with time in order to classify the binaries and determine where they were in their evolution. This project taught me a lot about the nature of star formation and the dynamics of binary systems. It also gave me a wide range of new skills and knowledge, which I used to further my career in astrophysics. With the support of a Dana Research Grant, Dickinson made it possible for me to continue this research until May 2019.

I plan to go to graduate school to earn a Ph.D. in physics or astronomy. I intend to pursue research in gravitational wave physics, study events from the beginning of the universe and contribute to the investigations of mysterious astrophysical phenomena. I would also like to be involved in science advocacy and become a mentor for young women in physics.