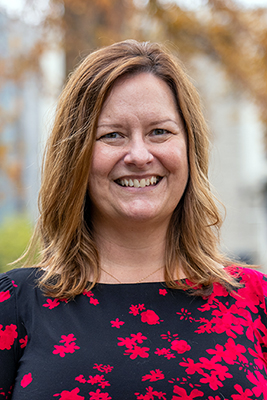 Professor Hamilton-Drager's research focuses mainly on young stars in the process of forming. She has examined the rotation rates of stars in clusters of different ages to trace the evolution of angular momentum. Stars naturally spin up as they contract while forming (like the ice skater who pulls in her arms). However, some stars are observed to spin fast (P < 2 days), while some spin slowly (3 < P < 14 days). Her research is exploring the interaction of the star's magnetic field and its circumstellar disk, or the material out of which planets will eventually form. Looking at stars in clusters of varying ages (1, 3, 5, 10 million years) allows one to assess exactly how long it takes for stars spin up and thereby infers a possible length of time associated with planet formation. As the disks dissipate, due to planet formation or other factors (high energy winds from nearby hot stars), the stars are freed and allowed to spin up. Professor Hamilton-Drager is probably best known for her pioneering work on the young stellar system known as KH 15D. The KH 15D system is a binary system surrounded by a circumbinary ring. Its light output has been evolving since ~1960 as a result of the gradual precession of the ring in front of the orbit of the binary. The ring acts as a natural coronagraph and provides us with information about the close environment of one of the stars. Her spectral observations show that star A's magnetosphere varies with time, sometimes compact (~1 stellar radius), while at other times, substantially larger (~2 stellar radii or more). There is also evidence for enhanced accretion following periastron passage (generally larger flux values during egress than ingress) as predicted by the models of gas flow from a circumbinary disk through a gap to the binary.

ASTR 105 Life in the Universe
A comprehensive study of the astronomical possibilities of extraterrestrial life including a brief survey of the universe, conditions necessary for life, and astronomical observations (including UFOs) which support or deny the premise that life in the universe is a common phenomenon.

PHYS 142 Physics for the Life Sciences
Introductory, non-calculus physics, principally for life science and pre-med students. Topics include acoustics, optics, electricity, magnetism, and modern physics. Three one-hour lectures and one three-hour lab per week. Because of the similarity in course content, students will not receive graduation credit for both 132 and 142. Prerequisite: 141 or 131.