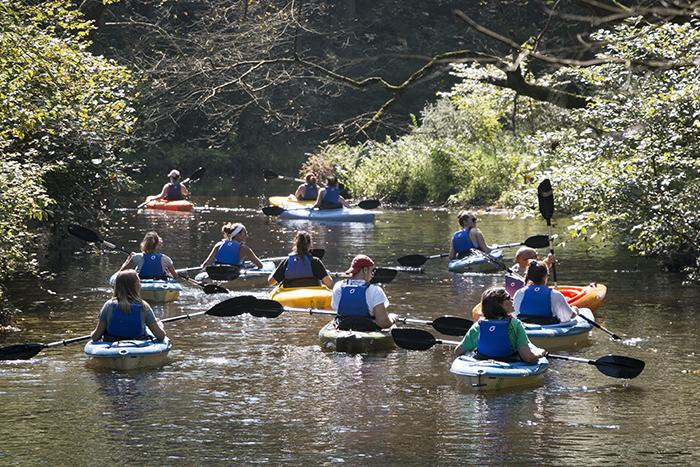 Dickinson College's Pre-Orientation Adventures are two-and-a-half-day, theme-intensive experiences for groups of eight to 15 incoming students. We talk with a student adventure leader and with the program's organizer to find out what the class of 2023 is doing in its first days on campus. Plus, we meet Jong Ho Choi '18, the Dickinsonian who composed our podcast's new theme song.

Also in this episode: Associate Professor of Mathematics Jeff Forrester reveals the "secret identity" of last episode's puzzler, and he has a new trivia question for you to ponder. Know the answer? Email thegood@dickinson.edu for a chance to win Dickinson swag.

Plus, President Margee Ensign reflects on a busy summer and the value of global education.

Pre-Orientation Adventures offer new Dickinsonians a chance to connect with new friends and new ideas. The small group theme-intensive experiences introduce students to the campus, Carlisle and their classmates.

The Good has a new theme song courtesy of Jong Ho Choi '18.

Puzzler: "In the Company of Giants"

"There have now been 66 of them, all this having begun in 1952, and this list has some real heavy hitters. Leaders in their respective fields and honored for contributions to science and the world. Whether elucidating the structure of DNA, studying culture in Samoa and New Guinea, developing computer languages, or advancing mathematics, this group’s reach feels like it spans billions and billions of topics. All honored with the memory of a natural philosopher, minister and eventual denizen of Pennsylvania probably best remembered for having discovered the eighth in the table."

Know who they are? Email your answer to thegood@dickinson.edu for a chance to win Dickinson swag.

President Margee Ensign explains why global education is critical and shares her excitement for the class of 2023.