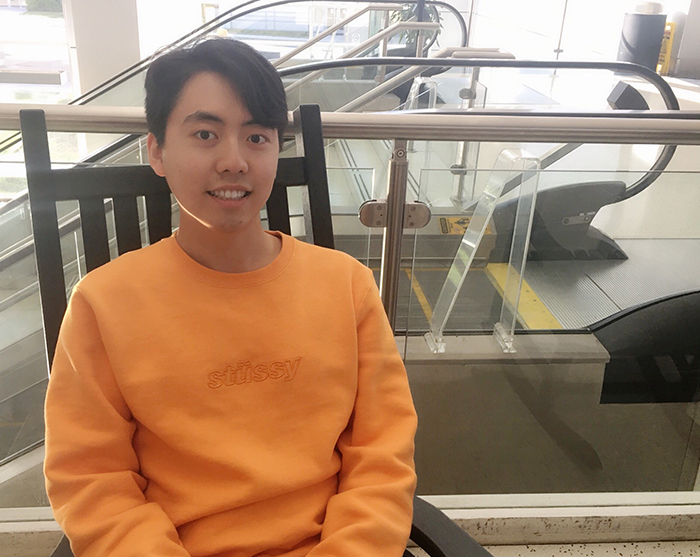 Jong Ho Choi ’18 (music, economics) dreams of creating a video game featuring his original music, art and coding, and that dream is coming into view. An amateur pixel-art and animation artist and trained composer, he’ll enter a master’s program in film, video game and television scoring at Berklee College of Music in Valencia, Spain, after graduation. Here, he discusses the upside of struggle, his time in the Korean army, and the wake-up call that spurred him to live each day to the fullest.

Ready Player One by Ernest Cline. You have to read the book, especially if you have only watched the movie version.

My dorm (whether it is Adams, Morgan, Factory Apartments or Buchanan, as long as I can lie in my bed).

A K-Pop artist took his own life in December, 2017. He was experiencing severe depression, and he was only a few years older than I am. It was a wake-up call; whether it is by a decision or an accident or an illness, people could die, even at a young age. That is why we must live every day to the fullest, giving everything we have to make it count.

What people are surprised to learn about me:

It appears that although it is the norm for almost all Korean men to serve in the military, my service seems to be an impressive thing to others. I served in the Republic of Korea army for 21 months, from September 2014 to June 2016, and I learned far more than just the military combat training. The experience shaped and refined my mind, and I am truly grateful for that.

If you think it is too late to do something, it probably is. Do not ever let yourself be too late; start right now.

I’ll pursue a master’s degree in scoring for films, television and video games at Berklee College of Music's campus in Valencia, Spain.

… an astrophysicist. Little did I know that it takes far more to be one than just saying, “I want to go out into space!”

Pixel art and making animated images. It is my personal dream to one day publish an indie video game in which all components of the game, including music, art, and coding, are my work.

I like the kind of learning environment in which students can fearlessly share their thoughts with each other. This demonstrates how safe students feel [in voicing their opinions]. It also allows individuals with different, sophisticated and unique ideas to share and grow together.

… my grandmothers, bless their souls, who were the most amazing cooks I’ve known (sorry, Mom). I would love to have a dinner where I can share a meal with them that they prepared for me.

… life would be so boring. We struggle through the countless imperfections we encounter every day, and we plow through the obstacles to accomplish our objectives. That is where the sense of achievement comes from. Life is unfair, and I believe in a perfect world, life will be fair to everyone, but we would lose purpose. Living without a purpose? Oh, how boring our lives would be.