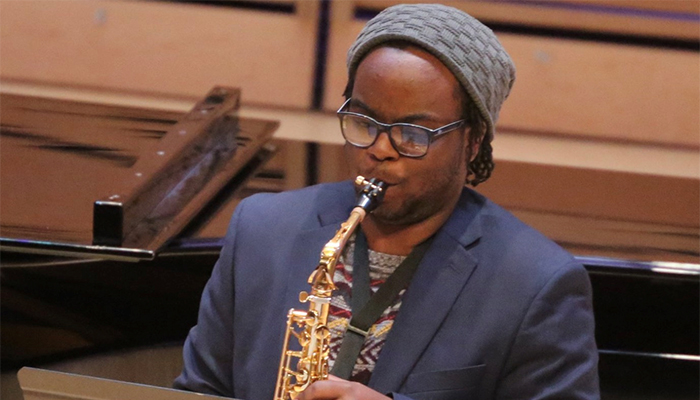 Coming to Dickinson, Noah Davis ’20 knew he wanted to study music, but a course in social justice also sparked an interest in the social sciences. Now he’s combining both interests, researching the ways that music therapy can aid in treating clinical depression. Davis also has enjoyed playing in jazz band and jazz ensemble, studying food culture in Italy, being a peer mentor, meeting friends from around the world and, as a California native, shoveling snow for the very first time.

Crooklyn and Mo’ Better Blues, both directed by Spike Lee.

When I arrived at Dickinson College, I came with the mindset that I wanted to be a music performance major.

However, around my spring semester of my first year I began to realize there was also another component of my educational experience that I wanted to explore. I was interested in examining social interactions between individuals and their environments in various circumstances.

I took an environmental and social injustice course with [Assistant Professor of Environmental Studies] Heather Bedi, and I found the course to be quite an enjoyable experience! I knew I wanted to study the social sciences, but I could not decide between the fields of sociology or psychology. So, in my sophomore year, spring semester, I decided to overload, taking intro courses in health psychology and social analysis, with the intention to pursue a major in one of them. With a bit reflection over that summer, I decided to become a psychology major and aimed to combine my experiences within the arts and social sciences.

Now, I am thoroughly happy with my decision, and I continue to strive and work hard to understand how I can use both of my majors in an occupation such as music therapy.

I wanted to challenge myself to receive my education in an environment that was new to me. I had been to the U.S. South and the West Coast, but I had never been to the East Coast, and I could not tell you how excited I was to experience the four seasons [here in Carlisle] and to actually see snow fall from the sky! I was actually willing to shovel snow on people's front lawns, just for the experience. (Don’t get me wrong: I thoroughly love my small town in California, but there is something about being in an area of the world that’s unfamiliar.)

Another reason I decided to be a part of the Dickinson College community was the amazing music program that the college offers. After becoming a Posse scholar and arriving on campus for Pre-Orientation, I was struck by how absolutely humble everybody was! Dickinson struck me as a college campus that was there for its students, inside as well outside of the classroom. I look forward going into my final year here with a smile on my face, friendships from all around the world and a vast amount of educational experience that I could imagine nowhere else.

I thoroughly enjoyed all the music theory courses I have taken at Dickinson, primarily because the music department has phenomenal staff members who really establish a tight community with students. The courses were challenging and at times stressful, but there was something wonderful about being with others fascinated in different aspects of music! If you ever want to take a challenging course and understand some of the music you listen to on streaming services, music theory will provide a foundation for you on that front.

“I’d like to point out to people the divine in a musical language that transcends words. I want to speak to their souls.” —John Coltrane

All of my professors have contributed to making me grow in ways I never knew I could. However, the professor that has been with me since the beginning of my first year here is [Contributing Faculty in Music] Jeffrey Wohlbach. I can’t tell you the amazing musical experiences Professor Wohlbach has brought to me. He is an extremely humble individual who has pushed me to such lengths to make me the musician I am today. Alongside [Contributing Faculty in Music] Jihoon Chang, with his techniques on saxophone and classical repertoire (and his quirky comedy), I could not ask for two more solid mentors/educators!

… John Coltrane, hands down, no questions asked. In my opinion, he was one of the greatest musicians that blessed us with his amazing mind and jazz performances.

I did a Mosaic trip with [Lecturer in Italian] Luca Trazzi, and I thoroughly enjoyed exploring the cities of Bologna, Mantova, Venice, Florence and Rome, stopping in beautiful smaller towns and learning about food studies in Italy. I used to be a great advocate of the Olive Garden, but after tasting the real deal, it is difficult for me to try anything else.

If you are ever debating going abroad for a full semester or two semesters, please do it. Even if it is something brief as a Mosaic, it is truly a blissful experience! The whole experience puts into perspective how diverse different communities in the world can be.

I wanted to be an engineer when growing up, because I was obsessed with robotics and a lot of sci-fi cinema such as Blade Runner, Ghost in the Shell, Looper, Star Wars, Interstellar, Black Mirror, The Martian, and even Cowboy Bebop (still my favorite). I was then interested in being a forensic investigator, after watching many crime thrillers with my parents, because I was interested in why certain people committed certain acts.

Even though I am an avid learner, as a double major here on campus, I love to play video games, especially narratively driven games, where I am an active contributor to the story. Examples are: Witcher 3, Persona 5, Detroit Become Human, Metal Gear Solid V, and Red Dead Redemption 2. I also love to loop music tracks over and over through my headphones, at times transcribing them; two of my favorite tracks are Childish Gambino’s “Redbone” and Kamasi Washington's “Fist of Fury.” I guess, with these favorite hobbies, you can say I was born to be a NERD—and I literally was, because my full name is Noah Edward Radcliffe Davis.

Being a first-generation college student for my father, who is from Kingston, Jamaica. Every day I look up to him and the work he’s done to come to the United States and pursue a future here.

Biggest influence in my life:

Both of my parents. Every day I learn from them and treasure every moment I have with them. They made me mature beyond my years and continue to strive for what God has planned for me in my life.

This summer I was at Pomona College, on a generous stipend, to construct a research prospectus that I will hopefully use for my current research project in the music department at Dickinson. Specifically, I examined and reviewed literature about clinically depressed patients and how receptive music therapy could aid in preventing harmful behaviors such as social isolation and eating disorders.

Also this summer through the PAYS (Pomona Academy for Youth Success) program, I aided high-school students who are attending Pomona College and applying to become Posse Scholars.

I plan to travel extensively after college. I really want to go to Japan first and play a lot of music on my saxophone with some Jazz musicians. Of course, in terms of my personal occupation, I plan to work at least two years as a lab assistant in the field of psychology and eventually pursue a doctorate in the field.

In a perfect world:

Everybody would love one another and appreciate their cultural differences. Plus, we’d have lots and lots more cookouts—some of us like to eat some really good food!

To “do you.” College is about self-discovery and independence: overseeing your own schedule, prioritizing work, eating healthy, exercising and living life to the fullest capacity. Find the activities on campus that make you happy, hang out with friends you enjoy being around, become an active member in your community and challenge yourself to try something, because that’s where growth happens!